Here’s hoping by now you’re making your way through senior web editor Adam Forziati’s 2019 AV-themed holiday gift guide and finding the perfect gifts for all the #AVtweeps on your shopping list.

But, if you’re still struggling to find something truly unique for that special someone on your list who truly has everything, I’ve come across a few ideas you must consider: headphones made from fungus and a leather strap to make sure you don’t lose your AirPods.

“Fungus headphones don’t sound like they should be a good idea,” says the narrator in a recent Reuters report about three teams of Finnish scientists who are putting the finishing touches—no pun intended—on their creation aimed at promoting sustainability.

Finnish scientists create a prototype for biodegradable headphones made from fungus, aiming to raise awareness about the possibilities of using microbes in the sustainable production process pic.twitter.com/pCozGR54OZ

I agree completely with the narrator that I could never imagine putting something made using fungus anywhere near my ears. I’ve spent my entire life—especially in the last few years as I’ve been swimming to exercise—trying to keep fungus away from my ears.

But that didn’t stop those wacky Finnish scientists from creating a prototype for biodegradable headphones made from fungus.

Their goal, they say, is to “raise awareness about the possibilities of using microbes in the sustainable production process to replace plastics in consumer electronics.” The headphones include cushions made from fungal foam combined with cellulose. 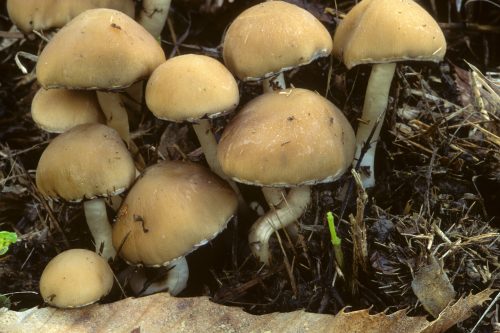 I think I’ll pass on the idea of listening to music through fungus headphones.

They use 3D printing for the more rigid parts of the headphones along with plastics made from lactic acid produced by yeast, according to the Reuters report.

In the words of Jimmy Fallon from The Tonight Show, “Ewwww.” I’m not sure who the market is for these fungus headphones but clearly someone must think it’s a good idea. I’m sure they’ll be the hot new thing by next year’s holiday season so keep your ears open.

If you can’t wait until next year to find that special someone on your shopping list something that will make him or her the envy of all who see them, you could do worse than buying a magnetic locking leather strap that you wear around your neck so you don’t lose your wireless AirPods.

In the old days, those used to be called traditional wired headphones, but I know we’ve covered the fact that I’m old and out of touch many times in the past. The good news is you can buy this Nordstrom-exclusive neck strap for your wireless AirPods in black or white for the low, low price of $60 with free shipping.