The Dallas Cowboys have never been shy about being on the forefront of new technology—and they’re already proving it again this season with the launch of several 5G-enabled interactive new features for fans, including what appears to legitimately be a first of its kind: Pose with the Pros.

Fans choose five Cowboys players to join them and their family members and friends in a group photo through an augmented reality experience that allows them to also share the photo by email or just brag to their friends later about their good fortune in getting America’s Team to join them on camera.

Pose with the Pros is one of several new AV innovations inside the House The Jerry Jones Built and the former home of the largest video board in sports. Fans can also use Samsung Galaxy S10 5G phones provided to them by Cowboys staff to see 36-foot-tall versions of Cowboys players doing Hype-Up Chants.

They can also record their own touchdown dances over a 3D video that makes it look like a Cowboys player is dancing right next to them and play a virtual game that involves dodging robot defenders as they try to move closer to the end zone.

“We’re combining the physical and digital worlds to create a world-class experience for fans, and sports provide a perfect example of how our business-first 5G strategy will bring value to consumers,” AT&T Chief Marketing Officer Mo Katibeh said in a statement. 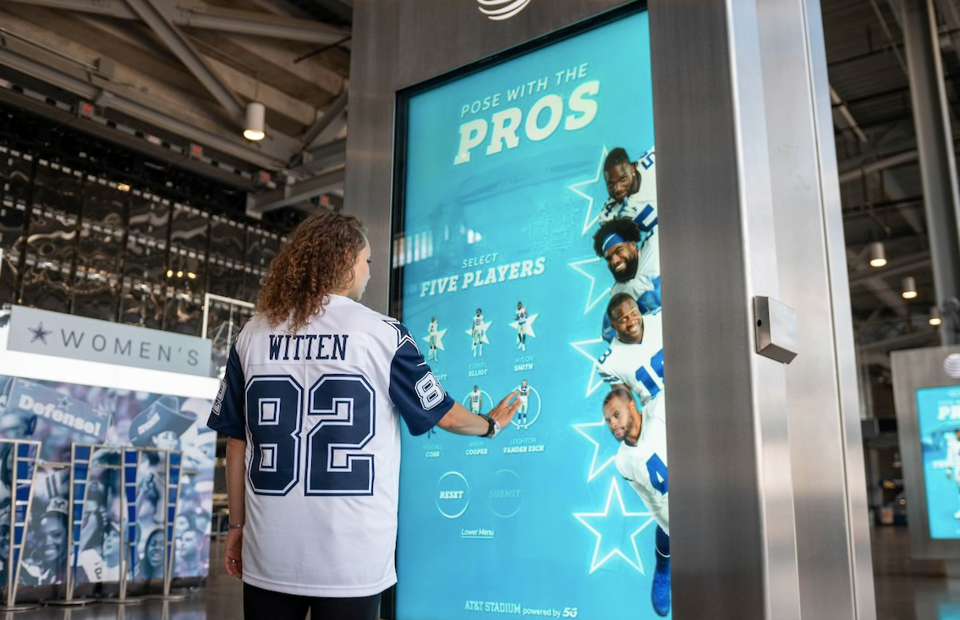 Dallas Cowboys fans loved the launch of Pose with the Pros and other 5G-driven features during the first game of the 2019 NFL season at AT&T Stadium. [Image courtesy of AT&T]

AT&T Stadium has had 5G capabilities since February, making it one of 13 NFL stadiums with the technology as the 2019 season enters its second week.

The arrival of 5G wireless networks for most consumers is likely a year or two away.

“We’re paving the way for how immersive fan experiences could be built in venues across the country as our 5G network continues to grow,” said Katibeh in the company’s statement.