The Major League Baseball playoffs are in full swing now, but let’s take one last look back at the All-Star Week festivities that brought most of the game’s best players to our nation’s capital for a few days of fun and skills competitions.

As the key audio and video vendor for Major League Baseball’s All-Star Week festivities, CP Communications also acted as frequency coordinator for all events in and around Nationals Park in Washington, D.C.

President/COO Michael Mason was on hand with a crew of 27 to operate all the needed broadcast hardware.

Along with Axient Digital, CP Communications used its tried-and-true stock of UHF-R and ULX-D wireless in key applications during the week. Monitoring for all Shure wireless systems was made available through Shure Wireless Workbench software.

“This was outdoors in D.C., so it was a tough coordination,” says Mason. “We used a lot of Shure wireless at various events, including the new ADX Axient Digital transmitters, to help meet our clients’ needs.”

During All-Star Week at Nationals Park, seven channels of Axient Digital and ULX-D digital wireless were used by key talent during the game-day Red Carpet show, an event designed to give fans an off-the-field look at the style and swag of the players. 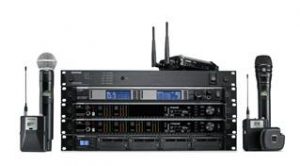 The receiver captures audio from both frequencies simultaneously, so audio is preserved if frequency becomes compromised.

Another interesting application during All-Star Week was field effects audio, designed to bring on-field sounds to home viewers. As part of this EFX design, wireless microphones were deployed inside the bases at first, second, and third.

High-powered UHF-R bodypacks were selected for this purpose, which required 18 transmitters using 3 channels, due to the frequent changing of the physical bases during the All-Star Game.

On the broadcast set, six more Shure UHF-R systems – again, in high-power mode – were in use during the game.

At the same time, two channels of UHF-R were in constant use at Fan Fest in the nearby Washington Convention Center, which featured baseball skills activities, autograph sessions with MLB Hall of Fame members, and special events each day.

“All week long, everything went really well and I give our crew credit for that. Our frequency coordinators did a great job of getting us clear channels, and that’s what it takes to make all that great gear shine in a difficult situation,” says Mason.