In Reynoldstown neighborhood of Altanta, The Eastern is a state-of-the-art music and event venue in the Dairies complex. However, one wall of The Eastern has an unusual turn thus leading to the installation of L-Acoustics Panflex horizontal steering technology to get around it and also provide SPL throughout the area.

The Challenge of the Venue 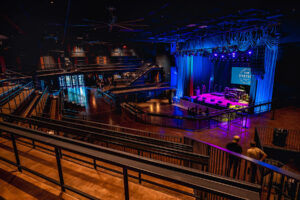 A curated mix of specialty shopping, dining, and entertainment venues, the 2,300-capacity venue also boasts a multi-tiered floorplan that offers excellent sightlines and a rooftop that includes a covered performance space, bar, restaurant, and open-air seating that can accommodate additional 300 patrons.

Nauman Lalani, director of Special Projects of Music Matters Productions, an Atlanta-based AVL integrator, expanded on the venue’s challenging geometry and remarked, “The main room is sharply asymmetric, with the house-right wall at a full 45-degree angle to the stage, which was very surprising for a purpose-built venue. It’s really a trapezoidal shape, which was very challenging for the sound-system design.”

While exploring solutions for full-range coverage for the space, Lalani discovered that L-Acoustics K2 technology was best suited for the project and came with a rider-friendly brand. “When we looked at a model of the venue and the coverage pattern and SPL goals we wanted to hit, especially at the low end for EDM shows, the K2 with its steerable fins was ideally suited for the task. The alternative would have been having to include a third speaker hang and all the motors, rigging, cabling—and cost—that goes with that. L-Acoustics was the way to go,” he said.

The company revealed that they installed an estimated $1.5 million worth of sound, lighting, and video systems for the venue. 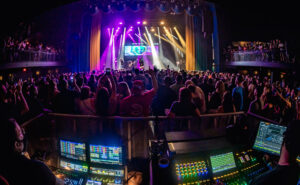 According to the company, K2 employs L-Acoustics Panflex, a unique horizontal steering technology that combines mechanically adjustable fins with DSP algorithms; effective from 300 Hz. Narrowing or widening the horizontal directivity servse many purposes such as adapting to the width of the listening area, enabling consistent SPL distribution for long and short distances, reducing or extending overlapping areas, and avoiding reflecting surfaces.

The solution comprised left and right hangs of eight K2 over three Kara II, each paired with a sub-cluster of four KS28 on the floor below. In addition, they installed a total of 23 short-throw X8 speakers in time-aligned matched pairs: six used as frontfills along the stage lip, two in a VIP area, and the remaining under-balcony.

Additionally, the K2 arrays, KS28 subs, and all X8 were powered by nine LA12X amplified controllers, while one LA4X powers the Kara speakers. A dozen X15 HiQ stage monitors, and two SB18 subs used as drum monitors, were powered by five LA12X. 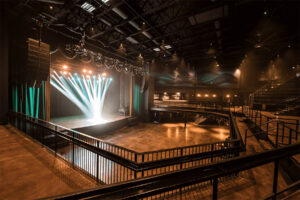 Left and right main arrays of eight K2 over three Kara II are each paired with a sub cluster of four KS28 on the floor below. Image courtesy of L-Acoustics.

The company stated that the systems were in full force for the opening night featuring rap/pop star Big Boi. “He gave the subs quite a workout that night,” said Lalani.

He also emphasized, “The Eastern’s L-Acoustics speakers are amazing. The top of the system is throwing almost 200 feet to the back of the room, so we needed a large-format box for that and to reach our SPL goal. We tested the system once we set it up and we were far exceeding that goal at 80 percent with no problem, so there’s lots of power and headroom. Plus, I was surprised by how light the boxes are. One person can pick up a KS28! When the system is running, it sounds phenomenal. We are super happy with it.”

According to Lalani, upstairs at The Eastern, a large event space featured another L-Acoustics system consisting of two A10i Focus and two A10i Wide speakers in a left-right configuration, plus two KS21i subs, powered by two LA2Xi amplifiers, one of the first installations of that new product. This rooftop system also included four 108P self-powered speakers used as monitors.

The venue owners expressed their happiness with the K2 system sounds in the room, noting how positively visiting artists responded to seeing L-Acoustics on their tech-spec sheet. They also acknowledged how L-Acoustics worked with them through the most challenging period in the recent history of live music production, according to Zero Mile Co-founder and Co-owner Alan Sher. 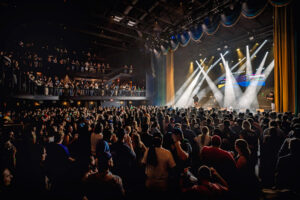 “Artists and production people like seeing L-Acoustics on the riders, but what stands out to us is how L-Acoustics, particularly L-Acoustics CEO Alan Macpherson, Americas, and BJ Shaver, Business Development Director for Install, Americas, worked so closely with us during what was an incredibly trying time, getting this venue together during the pandemic,” explained Sher, who established The Eastern with his partner, Scott Orvold. “The relationship was great from the start, and the attention we got from Alan and BJ really set L-Acoustics apart. They weren’t just a vendor—they acted like a partner.”

Sher added that he, Orvold, and the venue’s booking and production partner, Los Angeles-based AEG Presents, put considerable effort into achieving high-quality sound at The Eastern, with careful attention to the acoustic treatment and design. According to Sher, L-Acoustics played an integral role in the process by assuring a perfect fit of the system into the space.

“L-Acoustics collaborated with everyone involved on making this venue sound great. It was an incredible combination,” concluded Sher.