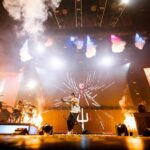 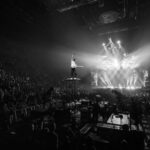 Tyler Joseph and Josh Dun, better known as Twenty One Pilots, have released six studio albums. This includes 2021’s Scaled and Icy, which nabbed the Top Rock Album prize at the 2022 Billboard Music Awards. After an extensive European festival run earlier in 2022 and the duo’s international Takeover Tour in late 2021, Twenty One Pilots is now out on The Icy Tour, its second North American trek supporting the album. Clair Global has been serving as the artists’ touring sound reinforcement provider since January and is carrying an L-Acoustics K2 system for the current arena run.

“I’ve worked on a number of K2 systems in the past and have really enjoyed their tonality,” says Kenny Sellars, who has been with the band since 2016. He first worked as a systems engineer, then took over FOH duties in January 2019.

Sellars adds, “Twenty One Pilots’ show is significantly more dynamic than a typical pop-arena act. The band uses a plethora of instruments, and the show varies from moments of EDM-like bass and heavy rock to quieter ukulele and piano-led pieces. We needed a system that offered us high fidelity from the quietest to the loudest moments night after night. The sound of K2 combined with KS28 works really well for this show.”

Clair Global systems engineer Christian Peterson agrees with K Series being the right choice. “I joined the tour just as they started the European festival dates in May,” he says. “During that time, I got to hear the show on a wide variety of systems and really enjoyed working on the K1 and K2 rigs we encountered. Kenny and I discussed a system for North America, and the initial designs we drew in Soundvision looked like they’d be ideal, and they have been.”

The Twenty One Pilots’ Icy Tour loudspeaker system features left and right main arrays of 18 K2 with 14 additional K2 per side as out-fills. It also has 15 Kara II on the 270-degree hangs. Low-frequency reinforcement is supplied by six KS28 hung per side, paired with 14 more ground subs. These are grouped in seven stacks of two with both a rear and front-facing enclosure in cardioid mode for directionality control. Furthermore, six Kara provide front-fill while four A10 offer utility-fill where needed.

“A big contributor to the coverage success we’ve been able to achieve on this tour has been K2’s Panflex feature, which gives us a lot of versatility,” Peterson shares. “I’m able to widen or narrow the coverage of the main and side hangs to perfectly suit the audience areas, which has assisted us greatly in some difficult venues.”

He adds that the quality of the predictions in Soundvision, thanks mainly to the software’s Autosolver tools, ensures a quick process each morning for system design.

“Once I’ve confirmed the venue dimensions with our tour’s rig plot, Autosplay and Autofilter give me confidence in the system’s deployment, which is then verified during the optimization process and my walk of the venue. We’ve also adopted the P1 processor, which enables us to utilize useful M1 measurement functions, including Autoclimate for temperature and humidity compensation,” Peterson explains.

With the PA efficiently deployed and calibrated by Peterson each day, Sellars is able to properly dig into his share of L-Acoustics software tools as well each night.

“I’ve worked on all of the major systems available, and while each is capable of producing a fantastic representation of the mix, how quickly and confidently I can access these tools and enable decisions is what sets L-Acoustics apart,” Sellars notes.

He continues, “The features available in LA Network Manager, such as Zoom Factor in Array Morphing, have given me the ability to make faster changes for what I’m after in the arrays.”

As Sellars mentioned, the combination of L-Acoustics’ K2 mains and KS28 subs has delivered a satisfyingly full-range experience for Twenty One Pilots’ fans each night of the Icy Tour.

“We’ve heard some great comments from audiences and colleagues on the sound, particularly on the extensiveness of the low end in certain moments of the show,” says Peterson.

“Tracks like ‘heavydirtysoul’ and ‘Lane Boy’ have moments of beautifully deep and forward sub, which are amazing to feel, and this system never fails to produce smiles from the entire crowd,” he concludes.

Click on “View Slideshow” on upper-right corner for images of the Icy Tour. All images by Ashley Osborn.