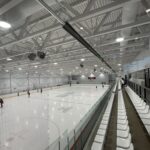 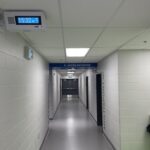 The Girardin Sports Center in Drummondville, Quebec, Canada is the city’s first indoor multisport complex. Opened in 2021 at a cost of $21.7 million, the center is helping alleviate a shortage in hockey facilities in the area for the city’s 68,000 residents. The Girardin Sports Center’s project team thus chose AtlasIED’s systems to provide audio entertainment and communications for nearly 5,000 weekly visitors.

For the Girardin Sports Center, music emerged as a central ingredient to deliver a memorable experience. The 73,000-square-foot facility needed an audio system to cover key spaces. These included the ice rink, indoor soccer field (overhung by a 820-foot running track) and the 16 rooms. The rooms comprised conference rooms, offices and locker rooms in the complex. One challenge involved controlling different music playlists for different zones of the facility with a range of acoustical qualities. For this, the Center chose AtlasIED’s Atmosphere Audio Processing and Control Platform and IPX loudspeakers and endpoints. with this, the Center looked to control and distribute audio throughout the building.

The Center uses the Atmosphere AZM8 to serve as the heart of its system. An eight-zone audio processor, the AZM8 includes learning ambient noise sensing and a built-in message player. Moreover, it allows up to 16 plug-and-play accessories that can connect across four accessory ports.

To ensure high quality audio in the different zones within the facility, the team chose AtlasIED IPX Series displays with built-in loudspeakers. This included the IP-DDS, an indoor, dual-sided display to show the time and scrolling messages, and IP-SDM indoor wall-mount loudspeakers. All of these IPX Series endpoints can live on an existing VoIP network and are Power over Ethernet (PoE+) capable. This allows each to be powered through the same Ethernet cable as the audio and metadata.

“The Girardin Center is a large facility and there are multiple smaller rooms. The IP-based products from AtlasIED were ideal for our installation as they helped us avoid having to run separate cables to each of the loudspeakers and displays for power and a completely different type of cable in the facility,” Daniel Bolduc, SONIMEC, construction project manager.

The facility’s two largest areas, the indoor soccer field and the ice rink, each presented unique audio challenges. AtlasIED Atmosphere however, helped the Girardin Sports Center address the spaces independently. In the 250-seat hockey rink, the team needed to account for the reverb and proximity of people to the reflective ice surface. The team installed both AtlasIED FS12T-94 loudspeakers and larger FS12T-99 loudspeakers to deliver richer, fuller audio.

“In this particular hockey rink, visitors are closer to the ice than normal and the ceiling is fairly low. That means the public is close to both the ice and the speakers. For fans and hockey players on the ice, we added some additional speakers to improve the coverage in the space to give more ambience in the space,” adds Bolduc.

On the other hand, the indoor soccer field presented an opposite acoustic challenge. The artificial turf field and the rubber infill cushioning the field absorbs the sound. For that reason, the facility needs to play the music at higher levels than the hockey arena. The project team installed multiple FS12T-94 speakers in the soccer field. With this solution, they created the coverage it needed for both players and fans alike.

The FS12T models are indoor/outdoor, two-way loudspeakers ideal for both voice and music. “The all-weather speakers are popular in arenas in Canada given the temperature changes and the potential for moist and humid environments from indoor rinks or playing surface,” notes Noah Daoust, vice president of SC Media, the exclusive distributor of AtlasIED in Canada.

The facility also allows the teams and players using the soccer field and hockey rink to play their own music via their mobile devices. Both areas installed the Atmosphere Remote Bluetooth Audio Input. This allows designated members of a team to connect and play their music over the audio system. The Atmosphere AZM8 automatically detects the Bluetooth device through the receiver. Moreover, it dynamically assigns appropriate audio settings. These include makeup gain, EQ and auto-gain control, to that input. By using Atmosphere, the team set the level so that it adjusts to the maximum level on a user’s phone. However, they pre-set it to be at a tolerable level on the field and rink.

The facility installed Atmosphere C-ZSV wall controllers throughout the various rooms and areas. This gives users control of the entire Atmosphere system from the various rooms throughout the facility. Atmosphere provides Center managers and staff the ability to control the audio, select sources and limit the number of people accessing the system. They can also adjust the volume for the different spaces, all from a wall controller, mobile device or a computer.

“The Atmosphere system gives us control capabilities to adjust the volume based on the noise level and activities in a particular space. And with the ability to access the Atmosphere from our phones, people can adjust the volume on their own, making it easy for us to manage and our visitors to use. Also, the ability to see the endpoints on the network and identify issues is incredibly helpful for us in the ongoing management of the audio system,” says Bolduc.

With the use of AtlasIED Atmosphere and IPX, the Girardin Sports Center is fully capable of providing music for entertainment. It also can implement audiovisual mass notifications when necessary. For instance, the staff can use the system to deliver daily schedule updates, lost and found announcements. Or they can even provide audio and visual messaging to direct visitors and personnel during emergency scenarios.

As needs evolve, the Girardin Sports Center’s audio system can easily accommodate additional IPX endpoints. With this, it can thus deliver both audio and visual communications to continue providing enjoyment while ensuring the safety of its visitors.