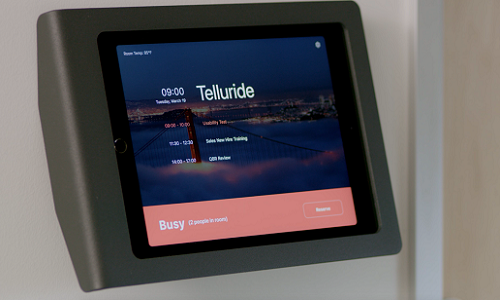 In addition to its phased approach to rolling out an end-to-end encryption offering to better secure calls, Zoom announced several new Zoom Rooms features during its fourth annual Zoomtopia.

The event, held virtually this year, comes as the platform is experiencing a gargantuan increase in users due to the COVID-19 pandemic and remote work. That surge helped to increase the company’s stock price more than 700% since the start of the year as usage skyrocketed in the spring.

According to Zoom, the platform now sees well over 300 million daily meeting participants, including more than 125,000 schools that are currently using the platform for free.

In addition to virtual events, apps, and other tools for developers, Zoom announced several features integrators and others in the AV community will want to pay attention to as customers begin returning to the office.

These include the Zoom Rooms Kiosk Mode that will allow office visitors to engage a receptionist virtually, a Scheduling Display that can tell people if the room is at capacity, enhanced voice commands, integrations with Alexa for Business, the ability to control Zoom Rooms from a mobile device or laptop, enhanced dashboard reporting and new controllers.

To support the hybrid workforce, Zoom is rolling out Smart Gallery that uses artificial intelligence to create a gallery of in-room participants and whiteboarding enhancements.

The company also detailed its new hardware options, which include the DTEM ME and Portal from Facebook. Other devices planned to be supported by the end of the year include the Amazon Echo Show, DTEN on TV, Google Nest Hub Max, HP Collaboration G6 24/27 and the Yealink MeetingBar A20.

Zoom is also leaning into remote work with its Zoom for Home devices, with several expected to come in 2021, like the Lenovo ThinkSmart View, Neat Frame, Neat Bar One, and Portal TV from Facebook.

Zoom is also expanding its hardware certification program to include personal workspace devices like portable USB speakerphones, including the new Poly Sync line.