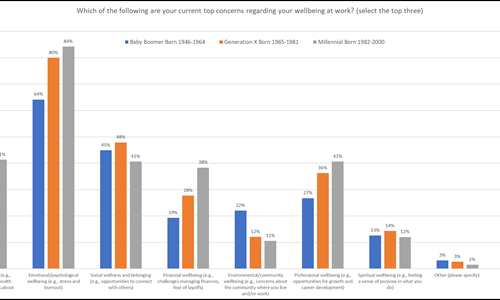 A new survey finds that U.S. workers rank mental and psychological well-being as one of their biggest wellness concerns.

Despite these worries, The Conference Board survey reveals that participation in programs including mental health resources and Employee Assistance programs has dropped. The report wasn’t broken down by industry but it’ll be interesting to see if there are numbers related to AV integration.

The nationwide survey found that most respondents continued routine doctor’s visits to some degree during the pandemic—although women struggled more.

Employees also report that they aren’t suffering in silence: An overwhelming majority feel their supervisor genuinely cares about their well-being—a likely basis for their comfort speaking of well-being challenges at work.

Conducted from early to mid-March, the online survey polled more than 1,100 US workers representing a cross-section of people across industries, from lower-level employees to the CEO.

The pandemic’s psychological toll: Workers rank mental well-being as one of their biggest concerns.

CEOs’ top concerns varied greatly from those of individual contributors:

Inside The Conference Board Survey

Despite overwhelming concern for mental/psychological well-being, participation in programs that address these issues dropped.

o            Only millennials increased usage of these programs:

One might expect the participation among millennials in programs for career and professional well-being to be higher, given their elevated concerns about professional and financial well-being. However, usage decreased 2 percent for this population.

“With the well-being of so many workers under immense strain, it’s surprising that the use of many programs to support wellness decreased,” said Rebecca Ray, executive VP of human capital at The Conference Board.

“These findings speak to the need for better communication from leaders about the availability of resources, and a rethinking of the ways in which companies offer them,” she said.

An overwhelming majority (78 percent) believe their supervisor genuinely cares about their well-being.

“Today more than ever, leaders need to understand their teams’ struggles so they can take steps to actively support their well-being, engagement, and productivity,” said Amy Lui Abel, VP of human capital research at The Conference Board.

“By managing with empathy, leaders can build trust and better understand how to support their employees’ well-being,” she said.

Most respondents maintained a health regimen—but CEOs and women struggled: