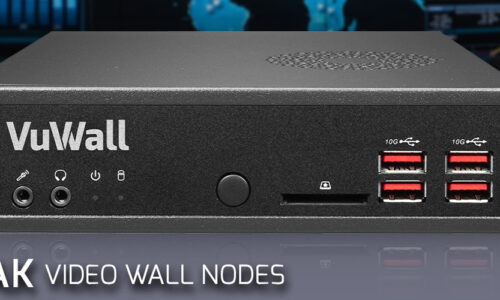 PAK is a networked, multidecode node that can operate as a stand-alone device or be stitched with other nodes to build an IP-based video wall that is infinitely scalable. It can be used to simply video wall project deployments by reducing the number of connections and eliminating a single point of failure, reducing project risk, and offering improved reliability, according to the company.

“If we peek behind many of today’s video walls, we’d expect to see an incredible amount of expensive hardware and lengthy cable runs snaking from an overcrowded rack that takes many labor hours to deploy,” says Mark Schmidt, chief technology officer of VuWall. “Unlike traditional video wall systems, it’s extremely easy to build video walls with PAK. Whether large or small, all that’s required are PAK appliances. To increase the size of a video wall, simply add a PAK. The only spare component needed to keep in stock is the PAK, reducing inventory costs and project complexity.”

As part of VuWall’s ecosystem, PAK is managed by the company’s TRx 3.1 software platform. Easy to set up and configure, per the company, PAK is designed for multiroom visualization, situational awareness, control rooms and corporate workspaces. Its eco-friendly design boasts a compact form factor and low power consumption. PAK is small enough to be mounted behind monitors, saving rack space and reducing extended video cable runs.

On March 9, VuWall will host a webinar to introduce PAK to customers and demonstrate its capabilities with a live demo. Event registration is now available.