Each January, New Box Solutions works with the Sundance Institute’s technical team in presenting its annual Sundance Film Festival. In 2019, the festival included 117 feature films, 90 percent of which were world premieres.

With hundreds of screenings, premieres and live presentations for about 100,000 guests and filmmakers, the Sundance Film Festival is a technological feat.

The 2019 Sundance Film Festival events took place across over 30 venues, 24 of which were churches, live stage theaters, hotel ballrooms and sound stages that needed to be temporarily equipped for the festival.

Installing systems in multiple venues at the same time was a challenge, especially when each system was a different size, and had variable power conditions for AV integrator New Box Solutions to accommodate.

The pop-up locations at the Sundance Film Festival needed to be strong no matter the venue, with no screenings, panels, interviews or other events going offline expectedly.

“Our event is world-renowned, and the industry has it eyes on us. World premieres are serious business; you only get one shot,” said Holden Payne, technical director of exhibition and production for Sundance Institute. 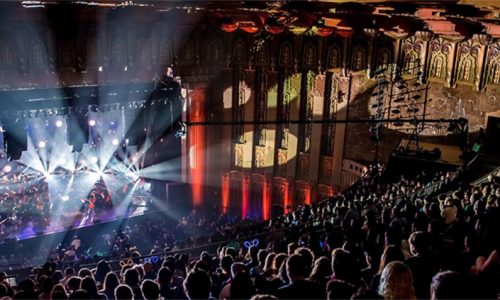 “A distributor, a producer, or a filmmaker has a bad experience and word spreads. Even under ideal situations, reliability is mission critical, but we are working in temporary venues in a mountain town in the middle of January. We need to be prepared for the worst,” he said.

“This aspect of our business is unique, where we have to bring in equipment to build out a screening or event venue from a blank state,” he said. “The questions for our team going into this is: What are the limitations? How do we overcome them?

“One of the most important aspects is power. Is it reliable? Are there surges and spikes due to other equipment taxing the facilities power for the event? The systems are complex, with playback servers, microphone mixers, video processors, Skype system and other mission-critical components,” he said.

The installations would run for just under two weeks during the festival, and New Box Solutions needed to create a temporary power foundation in each of the venues that would protect the system and fit in the rack as well.

The New Box team created temporary portable rack setups to be installed in each of the screening venues. To ensure that the festival was a success with no power-related problems, the equipment in each rack was connected into a power foundation.

Each rack installed by New Box Solutions had a SurgeX UPS-1000 OL or UPS-2000 OL model, with online double-conversion technology for clean power with no interruptions from electrical noise, spikes, sags, or surges.

Stars of the Sundance Film Festival

The temporary rack setups debuted at the Sundance Film Festival in January and were also rented to future clients at events serviced by New Box Solutions throughout the year.

The 2019 Sundance Film Festival spanned 10 days and was a successful run with no interruptions to the viewing experience in any of the locations. Even with no system disruptions, the team was fully prepared with the backup power from the UPS units.

“When you’re in the middle of an important screening (or event), the quicker you can react to issues, the better,” said Miller. “It’s critical to build in reliability so that our equipment is always running and doesn’t take down the event.”