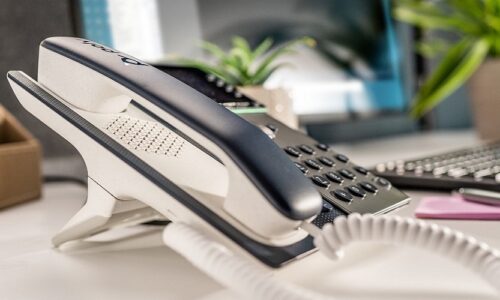 In addition to a sleek design, the phones feature the company’s Acoustic Fence and NoiseBlockAI technologies that eliminate distracting background noise regardless of where the employee is using the phone.

To ease fears of germ-spread in the office, the phones include Microban antimicrobial protection that was added during the manufacturing process for the entire series. The protection won’t wash off or wear away, the company says.

Users can also pair a Bluetooth headset to the Poly Edge E320, E350, E450 and E550 models. However, users can also pair their smartphone, which allows them to answer a call to their mobile phone from the Edge E desk phone and leverage the noise blocking features.

The Poly Edge E Series desk phones are also optimized for Wi-Fi, with the Wi-Fi setup screen presented immediately upon setup. The phones also offer diagnostic tests and a configurable support contacts menu that makes it easy for users to self-test their phone or contact support as needed.

For hot desking, the phones come with near-field communication (NFC) technology that service providers and end users can use to simplify the phone’s hot-desking assignment. Android smartphone users can also use NFC to simplify mobile phone pairing to the phones.

The company says the phones also come with accessibility features like text-to-speech capabilities and customizable fonts.

The phones are available now and will begin shipping this month, according to Poly.