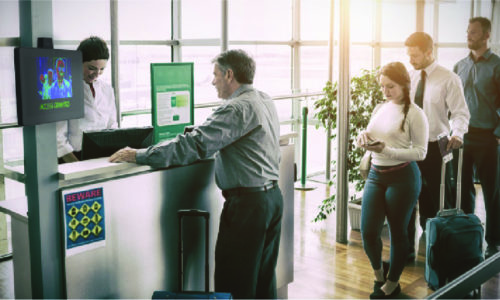 While most people are excited about the prospect of returning to their daily routines—including their commutes to and from the office, it seems there’s a likelihood that before they can actually set foot in the building and return to the friendly confines of their cubicles, someone will take their temperature.

I don’t expect anyone will have to open up and say “aah!” to be given the right to sit at their desks, but you can bet most office managers are working on plans to keep everyone safe in the post-pandemic world—but it won’t just be in the office.

The same thing might happen at your favorite sports arena or before you’re allowed to bang your head to the sounds of your favorite band in the local concert pavilion.

You’ll probably also start to notice someone walking around with what amounts to a six-foot-long ruler to ensure that, when people are allowed to gather together again, they’re maintaining a safe distance to limit the chances of a second coronavirus outbreak later this year.

To be clear, this isn’t the same kind of digital monitoring we heard about from Constant Technologies’ Kelly Okerson earlier this week, whereby companies are able to quickly interact with customers or people who say something about their brands on social media.

This is direct monitoring of your health and well-being and your ability to follow rules that are still new to all of us but are likely to stick around much longer than COVID-19 itself does. It’s certainly not a scenario I’m excited about or looking forward to, but it’s going to be reality before we know it.

Glimpse of the Future

I’m not a fan of the term “the new normal,” but these sorts of things are part of what we’re all going to be facing before we’re allowed to return to our routines of gathering with our coworkers, fellow sports fans, hunters of the next big thing on the music thing or theater enthusiasts.

I’m sure we’ll hear people say they’re not going to use the temperature or social distancing data they collect for any nefarious or additional purpose, but that seems counterintuitive to collect the data in the first place.

It’s not quite as unbelievable as sports teams saying they’re not going to use the biometric data they collect on fans who use their fingerprints or eyeballs for the privilege to watch games and pay $5 for a hot dog, but it’s up there. Color me skeptical of anyone saying the data they collect is going nowhere.

But I guess I need to brace myself for what’s ahead or I’ll be confined to my house for the rest of my life.