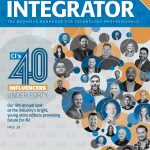 CI will move its 40 Influencers Under 40 list to June issue from traditional September publication. Nomination deadline is April 12. 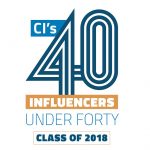 None of us knew what to expect when we published the first CI 40 Influencers Under 40 in 2014. Five years later, we still have no idea what will come next.

Nominations are now officially open for the fifth annual collection of young integration industry AVTweeps. Get your 40 Under 40 apps in by Friday, July 13.

The 4th annual CI 40 Under 40: Class of 2017 features our youngest members ever and other AV systems integrators who’ve made major marks on the industry.

40 Under 40 Where Are They Now?: Will Flavin, Flavin Lighting Design

40 Under 40 Where Are They Now?: Rob Simopoulos, Advance Technology

Founder of Launch Security and Advance Technology is a two-time CI cover boy, including as a member of the 40 Under 40 Class of 2015.