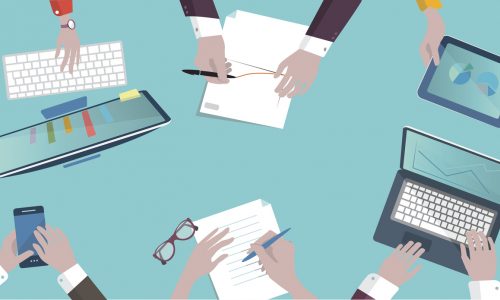 The first step for any company that truly wants to solve its customers’ problems is to understand your customers’ problem. Pretty obvious, right? However, getting a group of customers to sit down and discuss the challenges that they deal with on a day-to-day basis can be a challenge unto itself. It was eye-opening, therefore, when end-user focused CI sister brand TechDecisions co-hosted with integration firm Adtech Systems a roundtable discussion with four technology managers at Massachusetts colleges.

Adtech president Dustin Campbell joined TD managing editor Jonathan Blackwood and myself in leading a discussion that took on a life of its own with the technology managers excitedly talking about challenges to which others in the room can directly relate.

On Getting Involved in System Design:

“My role, when doing a system design, is typically what you would have from a consultant when doing a public bid job. I’m doing the user studies, running the job spec, running the performance spec, coming up with the conceptual design. The move to IT has been kind of helpful — every system we put in now has at least a couple IP addresses. Normally it’s just for monitoring and control, but in some systems we are moving audio through the network. Unless I’m embedded into IT that becomes much more difficult.”–Anderson, College of the Holy Cross

“Before I pick up the phone to call an integrator, I have a pretty good idea of what I want the system design to be. But when I reach out to the integrator I’m not locked into that system design. I’m open to alternatives. I’m very open to other concepts and products being pitched.” –Imming, Gordon College

“From a system design standpoint, we try as best practices to test everything before installation, so leveraging our relationships with manufacturers for demo units [is important]. We set out a small portion of our budget post-InfoComm. We see that we could be using wireless technology in two years [and decide] let’s start testing the water on where we want to go. What is that going to mean for our network? For me it’s getting harder to future cast. You see the switch to the service model — hardware points are getting compressed and the real value-add is in solutions and support.” –Imming, Gordon College

“We don’t put in anything where all the inputs on the switch are filled. We always make sure there are a couple switch inputs. We decided three or four years ago that from the wall jack forward we would drop analog support for video. We still have a VGA jack. Right behind the jack it’s converted to HDMI before it goes to the switch. There’s no VGA on the switch because I know that in two years I’m throwing that away.” –Anderson, College of the Holy Cross

On Getting Buy-In from Other Decision-makers:

“As far as the budget, I have a pretty good idea what I’m going to get every year. But there are other, projects that aren’t my projects. For example, new construction projects. They’re putting two new classes in and they want an AV quote. I’m not running that project so it’s hard for me to get it down. You’re dealing with all these other decision makers. It’s a lot more difficult. Classrooms that I can forecast every year are easy. It’s those other projects that other people own, with other people getting involved, that become difficult. Because they don’t understand the AV process.” –Stewart, Curry College

Classrooms that I can forecast every year are easy. It’s those other projects that other people own, with other people getting involved, that become difficult. Because they don’t understand the AV process,” says Kenneth Stewart, Curry College

“We have a group on campus, the Educational Technology Assessment Group, that meets far too infrequently. But, I work with the registrar, and I have people who work with the dean, and we determine what the current needs are. We also watch the faculty that are out on the edge to know what the approaching needs are.” –Anderson, College of the Holy Cross

“We have a similar setup. We have a committee called TLTech with the associate provost, faculty representatives, the library, IT, and they meet monthly to talk about a lot of things related to classroom technology system design. That’s where our standards go. Any deviations from that standard, like if you want to remove DVD players from a building, it’s got to pass that committee.” –Anderson, Lesley University

“What I do when I’m designing a room, or looking to design a room, is I look at who’s teaching in those rooms and I set up a meeting for all the faculty. They never show up. I would like more faculty input. I don’t have an education technology assessment committee unfortunately. They don’t talk about it. So, unfortunately, it’s me. There are some faculty that will give me feedback, but if I’m not getting calls and complaints, that’s how I know.” –Stewart, Curry College

“I’m in the same place, I do a lot of fishing for feedback on what’s working and what’s not working. I’m going to do an upgrade for this building or these rooms, and I’m skimming the faculty contact info for anyone that has taught in that room in the last year. It’s a lot of work to try to stay abreast of what they need, but you’re always going to take the fall because it’s not what they wanted or what they needed.” –Anderson, Lesley University

On Need for Training:

“As an end user, being able to engage manufacturers for support, being given training opportunities on a regular basis, really feeling empowered as an end user to utilize our integrators as a resource when needed but not necessarily feel tied to waiting for a service call. I think the relationship has gotten a lot better over the past couple years. I’m really pleased with the direction it’s going.” –Imming, Gordon College

“For my institution, it would definitely be a value [for integrators to provide training on products]. There are a smaller number of vendors that I work with closely, where I’ll be on the mailing list to see some training opportunity just down the road, where I can take a half a day. But unless I’m actively seeking them I don’t see some of the others in the area that I would want to go to or I would want to send one of my guys to. Finding the time to hunt out professional development isn’t easy. But if I had some kind of constant stream of opportunities coming through it would be a benefit.” –Anderson, Lesley University

This was the first in a series of roundtable discussions co-hosted by Adtech Systems and TechDecisions. Stay tuned for more insight from end users.