Based in Sioux City, Iowa, BNY Productions has been using the Waves eMotion LV1 to mix live streams for political rallies, speeches and a variety of other events.

“We were in charge of mixing the parade portion of the event,” said BNY co-owner Bill Kristijanto. “There was limited live audience this time due to COVID, but there were a lot of press scattered throughout the path of the parade.

“We mixed the PA but since there was limited audience, we sent the audio directly to the press box, which the press grabbed and then broadcast. The real challenge, however, was the fact we had to keep our equipment hidden due to the presence of cameras everywhere,” he said.

Related: How Will Transition to Joe Biden as U.S. President Affect AV Integrators?

“There was no room for a customary setup, so we were forced to place the entire LV1 setup in a very small space under the press risers,” said Kristijanto. “There were countless changing requirements and last-minute changes throughout this production, but we could still easily fetch at any given moment whichever component was required from that minimal space.

“Quick setup time was crucial to the success of this event. We had three days, which might sound like an adequate amount of time for this setup, but due to the event’s security protocol we had limited time and limited access to our locations,” he said.

“On top of that, we had to tear the setup down every night and set up again every morning,” said Kristijanto. “At the start of each day, we were all set up and ready to go in no time.” 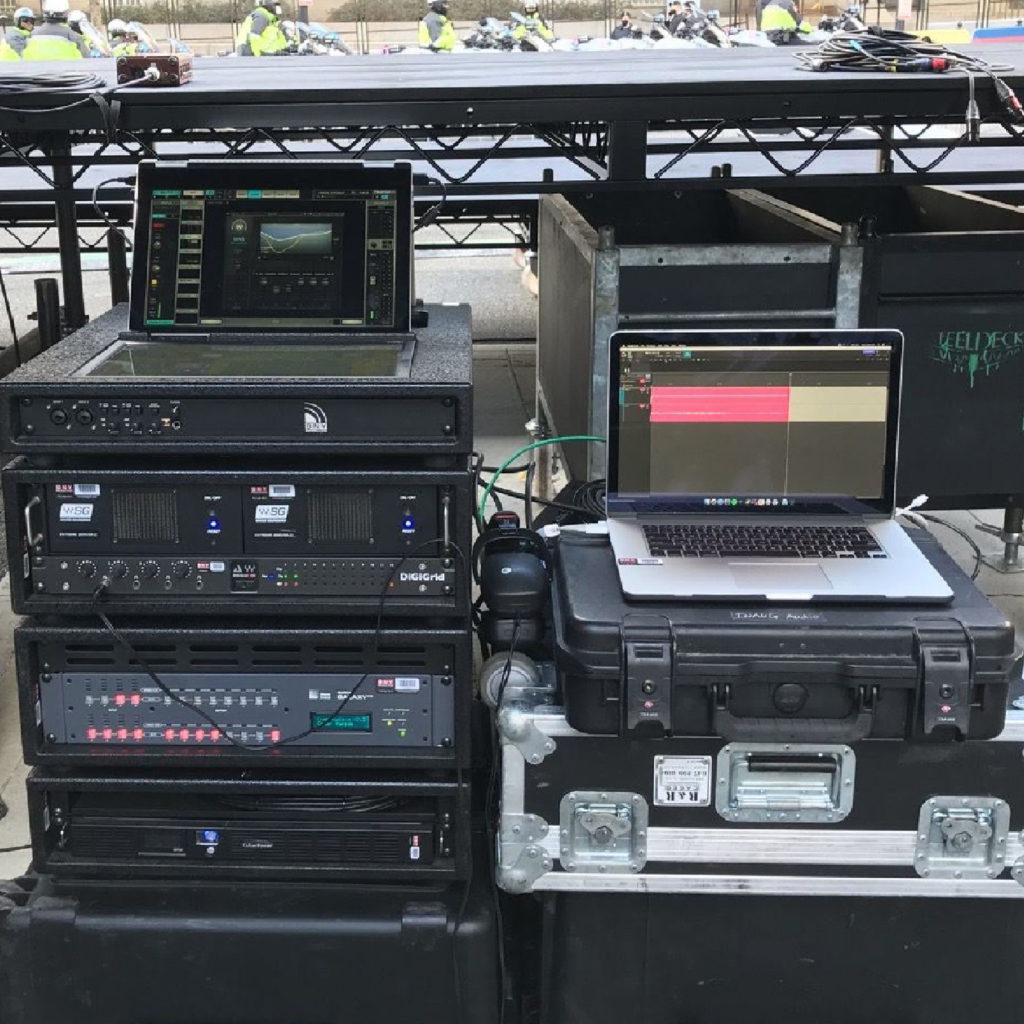 Along the Inauguration Parade Route

BNY had three LV1’s and microphone setups along the parade route, one at each press riser location. That enabled them to mix independently at each location, giving the client the freedom to decide last minute when and where ‘Voice of God’ (VOG) narration would be used.

“It also gave us the flexibility to fire the VOG narration or background music, either from one location or at each of the press pool locations,” said Kristijanto. All three LV1 consoles were connected together via SoundGrid on redundant fiber, spanning up to 1,500 feet between each location.

“Connecting all the consoles and the I/Os together in one network gives us another layer of redundancy in case of device failure,” he said.

In addition to the eMotion LV1 mixing software, BNY’s LV1 systems consisted of DiGiGrid IOX audio interfaces at every street intersection, and redundant Waves SoundGrid servers at every LV1 station.

“The redundant servers were essential,” Kristijanto says. “This is a one-time event – capture it now or forget it. With the redundant servers, we could rely 100% on the audio to keep streaming and processing seamlessly, without interruption.”