Related: 2019 BEST Awards: The 46 Winning AV Products in Every Category

The new additions include a wall-mount (“W” TSD) family of indoor/outdoor mic/line/Bluetooth mixers and accessories, a two-channel preamp/Dante interface, a mic/line preamp, a distribution amplifier and 24V power supply.

All of the products are part of AtlasIED’s Time Saving Devices (TSD) line, which includes mixers, amplifiers, preamps and other distribution and control devices.

The new devices “have been engineered and designed to simplify connections, satisfy specific application needs, and enhance installation flexibility and scalability for commercial AV integrators,” according to the AtlasIED announcement.

The new AtlasIED products also feature compact footprints and, with support of Dante, the devices can be added to a digital audio network in corporate, retail, healthcare, educational and hospitality vertical markets.

The new AtlasIED audio processing, mixing, and distribution products include:

Selection between mic or line level for the XLR input is done via a front panel switch.

A local mute button mutes output to the bus and a system priority button can mute building-wide BGM systems to isolate the room. An adjustable VOX feature allows for AUX input background audio to be muted when announcing is present.

The WTSD-MIX41K features four balanced microphone/line inputs and a balanced line output. Selection between mic or line level is done via a dip switch on the rear panel.

Separate level controls for each input provide control for the audio mix needed. 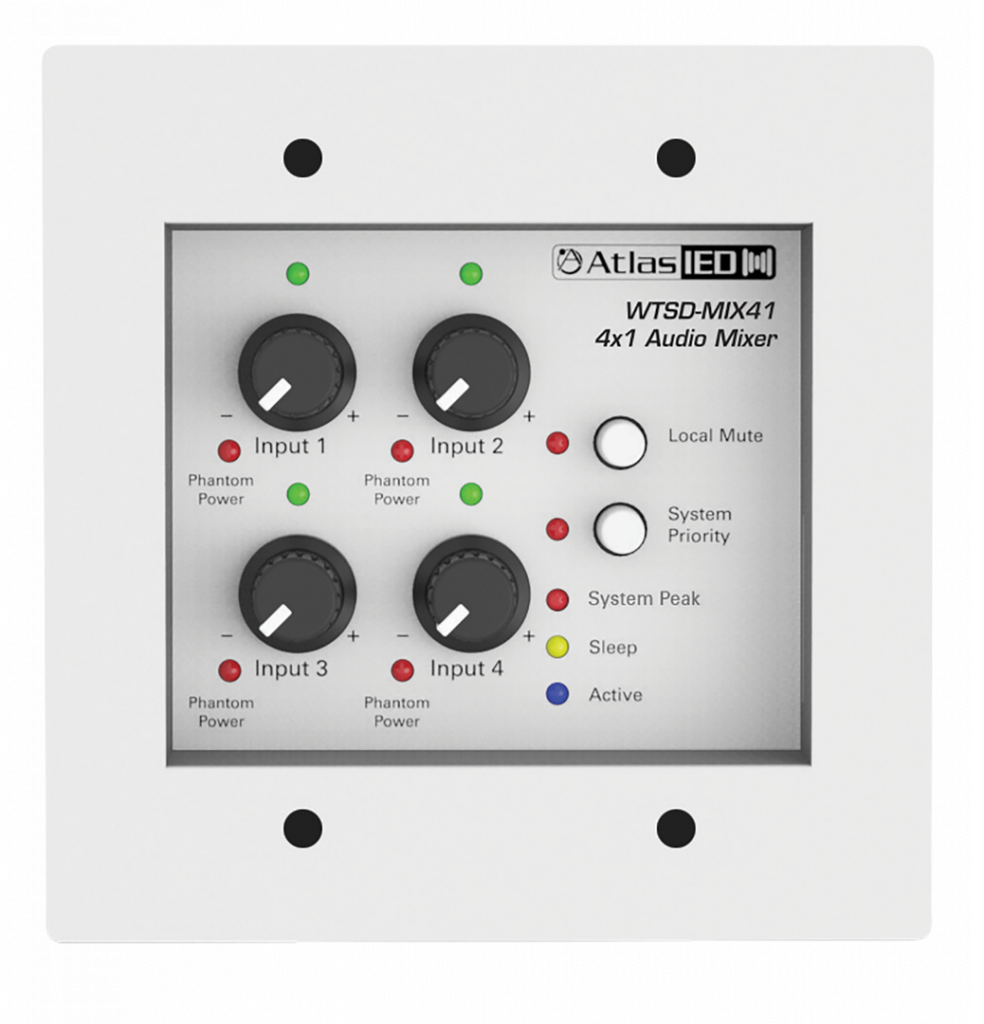 The WTSD-XLR4 can also be used as a standalone wall plate for any balanced mic/line system that requires a remote input plate. Each XLR has a three-way removable connector (G – +) for terminating standard two-conductor, shielded wire.

Both the WTSD-MIX41K and WTSD-MIX31K wall plates can be converted to Dante Digital Network audio when interfaced with the optional AtlasIED TSD-DAC2i converter. The wall plates fit into most two-gang boxes and can be used with a WTSD-COVER accessory for outdoor installations.

AtlasIED Audio/Power & Control Interface (WTSD-PWHUB)
The WTDS-PWHUB is designed to be used in conjunction with AtlasIED WTSD wall plate mixers at the head-end when additional headroom control and external device integration is necessary.

Features include emergency audio mute function for fire alarm systems and two NO/NC relays that can be configured to turn on or off the head-end amp rack with the auto sleep function.\

A priority button can be used to temporarily mute background music for paging purposes. The WTDS-PWHUB requires a 24VDC power supply.

Once converted to Dante digital audio, the audio can be transmitted over IP networks and routed in the Dante Controller software.