I knew it was only a matter of time—and it’s finally happened. I’m part of the 1%.

No, my new role as CI executive editor hasn’t placed me in the top 1% of salary earners—although I do have a bit more discretionary income now to buy more Boston-area sports team championship gear (not for the Red Sox this season, I’m afraid).

But I agree with the 1% of 3,640 respondents to a recent Ting Mobile survey who say the placement—and mere existence—of a headphone jack on their mobile phones is among their top three concerns when choosing a new phone.

On the flip side, I’m in the majority [55 percent] when it comes to keeping my phone for years rather than trading it in every year or every time there’s an upgrade, whichever comes first.

“After so many years of people being pressured into upgrading to a new phone when their old phone was perfectly functional, it’s encouraging to see that so many of our survey respondents are hanging on to their devices for longer,” said Andrew Moore-Crispin, director of content at Ting Mobile.

“The data from our survey indicates that people are more conscious about things like price and basic phone functionality. They don’t care so much about having the latest, coolest tech — something that might not be great news for the big manufacturers this year,” he said.

The top three factors survey respondents say went into their decisions to choose their new phones were price (35%), operating system (30%) and specs (14%).

Truth be told, I haven’t bought a new mobile phone in a few years now—other than the one I added when Emerald Expositions bought our company a little more than a year ago. I’m fine with my iPhone 6s—sorry for those unintended shivers, early adopters—especially now that I’ve figured out iCloud. 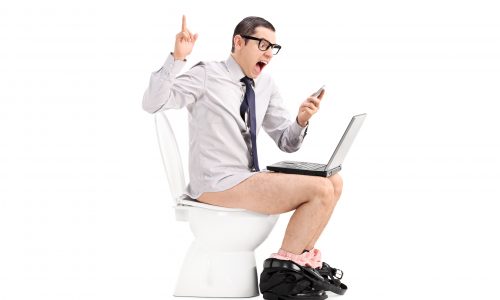 And I’m in no hurry to buy my next phone now that Apple and Samsung have completely gotten rid of their headphone jacks, although I generally use my cordless Sony headphones when I’m traveling from trade show to trade show.

My biggest objection to the lack of headphone jacks is it means I’ll see more people than ever with those cordless earbuds dangling precariously from their ears. I don’t understand why anyone would want to wear those.

I know I’d constantly be worried about one or both falling out of my ears.

And while my noise-cancelling headphones have been a revelation, there are still times when they get a bit hot, especially in a cramped airplane cabin and I prefer the relative comfort of those old-fashioned headphones, which need a headphone jack.

When I go that route, it means no charging my phone and instead worrying I’m going to run out of juice well before I reach my destination.

So, in short, the lack of headphone jacks for me adds another level of unnecessary stress and worry to travel, which is already fraught with enough of that, although I never think twice about getting on a plane and never wonder what will happen if the unthinkable happens.