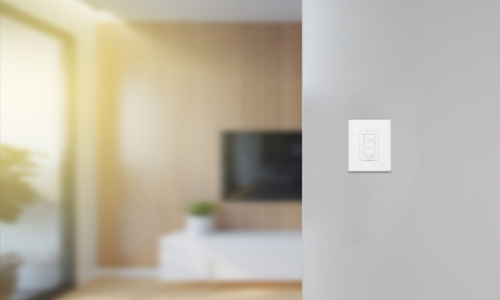 Image courtesy of Snap One

“With the WAKE Amp, our partners can use a single product to add super simple voice control to new audio systems, or to breathe life into older audio systems by replacing existing in-wall volume controls,” Jordan emphasized.

The Episode WAKE Amp connects a smart voice assistant or other Bluetooth audio device to speakers throughout the property. Thus, it makes it easier to use complex audio systems.

Featuring commercial-grade Bluetooth connectivity with a 100-foot range, WAKE Amp is a small, Alexa-optimized in-wall amplifier. It has three hard buttons for direct control of music. It delivers up to 25 watts of power to four speakers at four ohms. Plus, it has an LED meter below the buttons to show volume level.

Image courtesy of Snap One.

The Episode WAKE Amp is powered by existing speaker wire home runs with a power supply that attaches at the existing amplifier location. This eliminates the need for new wire runs. Thus, it is equally well suited for new construction projects that require simple, intuitive audio solutions. In such cases, just run speaker wires from the power supply location to the WAKE Amp, and then from WAKE Amp to the speakers.

“With more than 30 million in-wall volume control devices installed over the past 20 years, this presents an enormous opportunity for Snap One Partners,” Jordan added. “With the WAKE Amp, we’re making voice-controlled music accessible to everyone.”

Although the WAKE Amp requires virtually no configuration or setup, Snap One stated that Episode also designed an easy-to-use WAKE mobile app for iOS and Android devices.

The app offers instant control of volume and LED brightness, while also offering the ability to set the hard buttons to control either volume or playback. Plus, it allows users to add high-pass filters, adjust bass and treble tone, and apply room names for easy identification within the app. Additionally, users can add new Bluetooth devices with a single button press on the wall keypad.

Watch the video demonstration of the Episode WAKE Amp here.