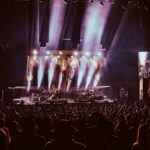 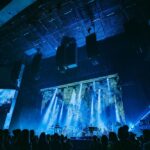 The exclusive two-day event marked the first concerts of the band in more than a year and a half. Moreover, it represented the first official worldwide deployment of the new L-Acoustics L-ISA Processor II.

L-Acoustics is of course, a France-based developer of innovative sound systems and technologies.

“My goal with this band is always to enhance the music and connect with the audience, not distract them with the sound,” Whitesel shares. “When it comes to immersive audio, there’s a fine line between glitz and gold, but the intimacy that L-ISA can bring to even a big venue like the YouTube Theater is amazing.”

Whitesel adds that the L-Acoustics immersive audio platform allows him to “more easily make my mix sound huge and beautiful…”  He enthuses, “I can [also] use spatial panning in ways that I’d previously feel guilty for.”

Whitesel then remarks that this changes how mixes are normally done. Usually, there are choices and comprises based on building a clean, big-sounding “mono-ish” left-right mix. “With L-ISA, the mix from my FOH position translates consistently to almost the entire venue — not just to a narrow strip of audience standing in the middle of the room.”

He also states, “I heard someone describe these YouTube Theater shows as a ‘visceral, communal explosion of emotion,’ which perfectly sums up the ideal Bon Iver concert experience that L-ISA helps create.”

Whitesel says he is no stranger to L-ISA technology. He used it for the second leg of the band’s i,i tour in early 2020. What’s more, he first explored it with a one-off concert at the Santa Barbara Bowl in 2018. The recent availability of L-ISA Processor II, he says, makes an already great thing even better.

“The new spatial front-fill is an uber-cool improvement,” he enthuses. “Before now, front-fill was mono, and so this new ability finally brings a full spatially immersive experience to the very front rows. L-Acoustics has also developed a new reverb that’s remarkable.

Whitesel goes on to describe how the onboard L-ISA reverb spreads out the ‘verb tail amongst the whole L-ISA configuration, creating a fantastic sound.

He also expands on the new Controller software. According to Whitesel, the new software adds several new features that greatly enhance usability. He describes a feature for tying solo on the desk. For example, a DiGiCo Quantum7 feeding out to all of L-ISA’s 96 available object to focus on the correct object in the L-ISA Controller software.

Furthermore, they added compatibility with stereo channels and groups. This helped Whitesel to easily translate his left-right session and left-right brain to the L-ISA Scene/Extension setup. He adds, “Even though it does take some training and practice to optimally use object-based audio, I don’t think it’s possible to have a bad mix with L-ISA.”

The company also touches on the transition of the venue’s fixed stereo system into a 7.1 L-ISA immersive hyperreal spatial audio design. According to L-Acoustics, it seemed like it might require significant investment on additional gear and time. However, the company says the two shows disproved that notion.

For the shows, five Scene arrays spread out and flew over the width of the stage. All featured ten K2 over four Kara II down-fills, paired with far left and right Extension arrays. Both composed of a dozen Kara II. Additionally, nine K2 over six Kara II per side served as out-fill hangs. Six Kara II per side also functioned as over-balcony out-fills.

Two arrays of eight KS28 subwoofers each hung behind the center array in a cardioid configuration. Additionally, 12 KS28s were positioned on the floor across the full arc of the stage. A dozen Kiva II spread out across the stage lip delivered spatial front-fill for the first several rows. LA12X amplified controllers fully powered the entire system, which was driven by an L-ISA Processor II and three P1 digital audio processors, all on redundant Milan-AVB networking.

L-Acoustics Head of Product and Technology Marketing Scott Sugden describes the end result of the 180 loudspeakers combined with object-based mixing. Sugden says that fans experienced a more clear and nuanced sound. According to him, the band felt as if they were merely 10 feet away even to those at the very back of the venue.

Sugden also states that Vernon’s voice engulfed the entire theater and enveloped each patron. Thus it gave the shows the intimacy of listening to the band on headphones. “But it also had the dynamic raw power of a live performance and the ability to connect the fans with the artists on stage,” remarks Sugden.

Per Sugden, L-Acoustics has spent the last 30 years developing technologies to ensure that everyone in the audience has an amazing experience. He adds that the L-ISA technology is the absolute culmination of those efforts. “It will be hard for those fans who were at one of these shows to go back to a ‘regular’ concert again after experiencing this,” he proclaims.

Whitesel also states that the shows were transcendent. “It was a cathartic experience for myself, the band, and the audience,” he says. Whitesel also talks from his personal perspective. He expands on the experience on mixing his favorite bad at a venue like YouTube Theater and summarizes it as amazing. He adds, “I feel very lucky for the opportunity. This show felt, in many ways, like the ideal version of a live Bon Iver show.”

Click on “View Slideshow” on upper-right corner to view all images of Bon Iver at YouTube Theater.