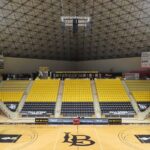 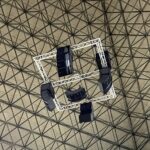 Unknown to many, one of the four architecturally true pyramids in the U.S. is in Long Beach; specifically, the Long Beach State Walter Pyramid, the sports and event space for the university’s athletics department. The $22 million venue, built in 1994, has hosted several NCAA events. These include women’s volleyball NCAA matches, the 2001, 2003, and 2019 NCAA Men’s Volleyball Championships, and the 2003 NCAA Women’s Volleyball Regionals.

Per a statement, the uniqueness of the Walter Pyramid’s exterior also presents interior geometric challenges. It is believed to be the largest space-frame structure in North America.

The Walter Pyramid measures 345 feet on each side of its perfectly square base. It thus accommodates three full basketball courts and four additional half basketball courts. It also features a unique cantilevered seating system mounted on moveable platforms. The Walter Pyramid also installed a new L-Acoustics Ai Series sound system, a project completed in early 2022.

According to the company, the venue’s previous and original PA system featured old and outdated technology. Its truss-hung loudspeakers had stopped working and portable speakers supplanted them.

“It was the original sound system, installed in the early 1990s, and it was pretty old technology that was simply ineffective for this type of building,” says Mark Edrington, senior associate athletics director at Long Beach State. He also acknowledges that sourcing a new sound system for the venue would be a challenge. The main reasons being its geometry, unique moving seating system and its requirements to accommodate a wide range of activities.

Unlike many venues with retractable seating, the lower bowl at Walter Pyramid hinges and raises in drawbridge-like sections to create an open flat floor. In this “seats up” configuration, the metal undersides of the seating sections become acoustical reflectors around the lower bowl.

“In terms of audio, they were limping along in there,” says Susan Holguin, founding CEO of Burbank-based Vizual Symphony, Inc. Vizual Symphony is the integrator that installed the new L-Acoustics Ai Series system. Per a statement, the system was the culmination of two years’ development of a system design by consulting Idibri, a Salas O’Brien company. That system would come to include, after safety inspections, a replacement of the entire truss system. This was no small task in a building with no parallel surfaces.

Then, the team rewired the entire cable path with new, super-heavy 8-gauge audio cables needing to run as long as 190 feet to the highest point. Here, Holguin worked on the project with Marc Joves, Long Beach state project manager, and Ben Frederick, Production Access Group CEO. In retrospect, says Holguin, this project made the L-Acoustics Ai system installation itself seem like a breeze.

The new loudspeaker system design is typical for an arena installation. It has a four-sided cluster with A15i Focus speakers as the main enclosures. There are two per hang except for one hang, which has only one A15i in order to shorten it above an area with no bleachers.

All four hangs are buttressed with one A15i Wide on the bottom and one KS21i sub on the top. A horizontally-hung array of four A10i Wide provide court-floor coverage. One LA2Xi and one LA4X amplified controllers power and process the entire system.

Edrington has oversight of all of the school’s athletics facilities. He is also the sports administrator for Women’s and Men’s Volleyball, Men’s and Women’s Water Polo, and Women’s Soccer. Additionally, Edrington also oversees the implementation of all athletics capital improvement projects. He expresses his enthusiasm for the L-Acoustics brand. “They’d been in touch with us over the years,” he says. “Prior to the pandemic, they even came in and did a sound assessment for the Walter Pyramid.”

That would prove especially helpful, Edrington says, noting the venue’s very tall structure and what he calls its “tricky” acoustics. “The old sound system had acoustical challenges because of the unique shape and design of the building. The volume setting for the lower seating area would be at one level. [Meanwhile] fans in the upper seats were literally getting blasted,” he remarks. “Sound in here is challenging, but L-Acoustics seems to have conquered it by making the sound consistent throughout.”

Idibri’s Ryan Knox also expands on the project. “We used the flexibility of the Ai Series’ vertical and horizontal patterns to maximize coverage of the seats and minimize sound hitting the walls in both the ‘seats up’ and ‘seats down’ configurations,” he reveals. Knox adds that Soundvision proved out the coverage quickly, Additionally, they used EASE to verify if the design was optimized for the unique acoustical environment and would achieve the intelligibility goals.

“The loudspeaker system went without a hitch, and when we turned it on, it was exciting,” Holguin recalls. “They’ve also installed a nice, big videowall, and seeing and hearing all of these new systems makes it feel like a brand new arena. According to Holguin, the highest compliment received so far is on social media. She states that people posted about hearing announcers clearly over the audience. “…Now that’s a powerful PA,” Holguin proclaims.

Installed just as the basketball season was wrapping up, the new system is fully ready for the 2022 volleyball season. And even though it’s still early days for the L-Acoustics Ai Series system there, says Edrington, “It’s performing well and meeting expectations.”