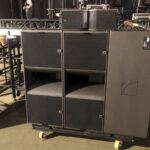 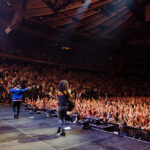 When three-time Grammy Award-winning country duo Dan + Shay hit the road in March of 2020 for their first official headlining US arena tour, they played three consecutive sold-out shows. Then COVID-19 struck, grinding the trek — along with everything else— to a sudden halt. A year and a half later, the highly-anticipated tour finally picked back up, rescheduling and resuming the 30 remaining sold-out shows on the three-month run, which carried an L-Acoustics K Series loudspeaker system supplied by technical solutions provider PRG. The company supplied all the audio, video, and lighting systems for “The Arena Tour.”

“This was our first tour with PRG, and as soon as I knew that they’d be our touring partner, I went to our production manager and said, ‘Hey, if we can have it, we’d love to be on an L-Acoustics rig,’” shares Taylor Bray, who has been Dan + Shay’s front-of-house engineer for the past eight years. “I’ve mixed our artists on a lot of different systems, but some of the best shows have been on these big festivals with huge L-Acoustics PAs where we’d walk up with no soundcheck — line check only — do the show, and then afterward think, ‘Damn, that felt good!’”

PRG expands on the components of the L-Acoustics K Series system. The firm carried a tight single-truck pack of 32 K1, 40 K2, and 6 Kara enclosures, 18 KS28 subs, and 48 LA12X amplified controllers housed in custom racks. For the shows, main arrays comprised 16 K1 flown over four K2 downs per side, augmented by adjacent out-fill arrays of 16 K2 per side. Ground subs were grouped in threes and vertically strapped to six KS28 chariots in an asymmetrical cardioid configuration, and each sub cluster was topped by a single Kara front-fill enclosure. Two L-Acoustics P1 processors paired with M1 measurement tools provided overall system tuning and processing.

Each night, the artists would open their show out on a plus sign-shaped B stage 60 feet out from downstage, returning there several times throughout the two-hour performance for their quieter, more intimate numbers. With the full band portions of the show being louder, the audio crew point to LA Network Manager’s Cardioid Extended (Cx) preset library as being a huge benefit to keeping the full system under control.

“The Cx preset for the KS28 subs really cleaned up everything — not only the stage but the room too,” says Eric Thomas, PRG’s FOH system tech, who first worked with the artists on their Super Bowl LIV Pregame Show two years ago. “It really helped keep the energy in the room and tighten up the low end. It felt like a 100-percent improvement in sub energy.”

“The increased subwoofer directivity and rear SPL cancellation really saved me in my world on stage left,” agrees monitor engineer Austin Brucker. “Also, our tracks operator was three feet behind the full stack of subs, plus our guitar tech tuned acoustic guitars just a few feet from an array, but there were never any complaints from any crew about volume. Other systems have beaten us up in the past, but with L-Acoustics, onstage, it almost felt like the loudspeakers weren’t on. During soundcheck, I’d sometimes walk out just to make sure that stuff was happening, and there was never any shortage of energy out front. That ability to keep the deck super-quiet was great for us, but also allowed our principals and musicians to perfectly hear themselves, focus on their performances, and deliver amazing shows.”

On the other end of the fiber at front of house, Bray reveals another tool he appreciated having perched on his Avid S6L mixing console — a pair of self-powered L-Acoustics 108P used for talkback, cues, and nearfield monitoring.

“I used a very multipurpose pair of 108Ps on my bridge and absolutely loved them — I wanted to take them home with me,” he says. “I’m not sure how L-Acoustics did it, but aside from the difference in the operating bandwidth, what I heard on these completely translated to what I heard on the K1 mains. During those times when the PA was going up, or we weren’t allowed to make noise in the room yet, there were still elements of the mix that could be worked on. If it sounds right on the 108P, it’ll sound right in the room. Plus, if Dan or Shay wanted to listen back to how anything sounded the night before, they could step into my ‘office’ and get a really accurate representation of their performance.”

With K1/K2 arrays paired with KS28 subs, Thomas notes that the crowd was “all smiles” regardless of where they were standing or seated. “I would walk around quite a bit while the band performed and found that our coverage was within 3dB almost everywhere. Even while standing at front of house, I could turn around and see the people up in the 300s having a good time and know full well that they were doing alright. That’s the beauty of this system. It never feels like it’s 100-plus feet away. Even at long distances, it’s still intimate, like you can reach out and touch it. And though it feels in-your-face, it’s not at all fatiguing — no hot spots, no harshness, no ringing ears. I can’t say that for most other manufacturers’ systems.”

At the end of the day, for Bray, the L-Acoustics K Series system was the right choice for “helping audiences best connect with what the artists were wanting to share,” he says. “As the audio team, we’re all trying to make things hit more and give people more of an energetic and personal connection to what’s happening onstage. K1/K2 provides that, and we heard so many compliments nightly to that fact. Management, other bands, fellow engineers, and audiences were all really, really positive about what they were hearing, including the fact that the lyrics were so intelligible in many venues that frequently suffer from muddy, murky sound.”

To view photos of the L-Acoustics K Series system, click on “View Slideshow,” in the upper right corner.