Along with 15 aircraft gates, the concourse also has an interior that is organized into a series of “neighborhoods,” which each include multiple aircraft gates, a restroom core, and a wide selection of various retail and concession spaces.

According to Renkus-Heinz, the audio portion of the 750,000-square-foot concourse construction was critical to LAX so that important announcements and communications could be delivered in a clear and intelligible manner to the airport’s millions of annual travelers. LAX officials revealed that they worked with the California-based systems integrator, Direct AV, to design and install the gate announcement system for the terminal.

“This is a huge new terminal with the characteristic high ceilings, reflective glass walls, hard reflective floors, and a lot of ambient noise expected from a transportation hub,” said Jeff Barrett, system design engineer at Direct AV and lead point person for the project. “We needed loudspeaker technology that could give us precise beam control and a high level of speech intelligibility while offering a discreet footprint to fit the architectural requirements and constraints; and for that, we turned to the Iconyx beam steering system from Renkus-Heinz,” added Barrett.

The Iconyx system’s 4-inch low-frequency transducers and triple 1-inch high-frequency drivers produced more than enough headroom allowing for significant levels above the ambient noise floor. The Direct AV team installed a mix of more than 30 Iconyx IC8, IC16 and IC32 arrays within the West Gates and have made plans for additional installations of the Iconyx Gen 5 arrays. 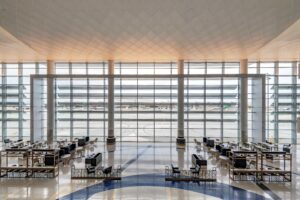 Barrett emphasized that the system was specifically designed for terminal-wide passenger announcements and gate announcements. With fine-tuning through the Renkus-Heinz software, the system covered all common areas within the terminal, including all gate seating areas, retail spaces, restaurants, restrooms and concession areas of the concourse.

The company also touched upon the architectural issues and how they addressed them. “The Iconyx loudspeakers had to be mounted relatively high on the adjacent walls at around 12 feet above the finished floor level. Using conventional loudspeakers would have compromised the direct to reverberant sound, which was not an acceptable compromise, and thus, the Iconyx digitally steerable loudspeakers were the perfect solution for this challenging space,” said Garrison Parkin, western regional sales manager for Renkus-Heinz.

Touching on the digital steering capabilities, Parkin added, “With Iconyx, we can digitally steer the sound down to the travelers giving them the direct sound element rather than reflected to the walkways and deliver remarkable sound quality right to where the people are and away from the reflective surfaces.”

Renkus-Heinz declared that the intelligible and perfectly positioned sound solution from the Iconyx speakers ensures that everyone who needs to hear the sound in the concourse, can hear it with clarity.