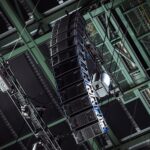 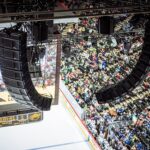 “We are highly impressed by the way our new Meyer Sound system delivers clear and uniform sound distribution to fans throughout the Xcel Energy Center,” says Minnesota Wild president Matt Majka. “No matter where you are sitting in the arena, the improvement in audio quality is undeniable. Feedback from event attendees has been tremendous. We are extremely pleased with our decision to install a state-of-the-art system to heighten the experience for our fans.”

The new Meyer Sound system replaces an aging point-source system that was installed when the arena, seating about 18,000 for hockey, first opened in 2000.

“What we had was a low bid system with old technology,” says Jim Pfitzinger, the IATSE Local 13 engineer. He has mixed Wild games since the arena opened and who was a key consultant on the upgrade project. “Top team management had heard systems at newer arenas and noticed the difference. Our old system was still intelligible and serviceable but it lacked real impact. No matter how hard you flogged it, you could only get so much out of it,” adds Pfitzinger.

When funding became available in the spring of 2022, management asked Pfitzinger to fast track a new, state-of-the-art system that would be equal to or better than any other NHL arena. Pfitzinger consulted with Domonic Sack of Sound Associates on possible options at a time when industry supplies were tight.

Some makers could not commit to delivering the preferred products on the tight timeline. However, Meyer Sound was able to fit the Wild project into its production schedule. In only 11 days, the team wired, hung and tuned the entire system, just in time for the first Minnesota Wild game with the new system.

“Dom had just heard Meyer Sound’s PANTHER demo in Las Vegas and said he was convinced it was the right solution for this arena,” says Pfitzinger. “We wanted line arrays with a small footprint to stay clear of touring rock shows, plus low power consumption and reduced weight. Powered speakers were high on the list as we had literally tons of amplifiers and copper cables in the ceiling and we couldn’t take them out until the new system was up and running. Also, everything had to go up and down on the motors. On all counts, PANTHER fit the bill — and Meyer Sound could deliver!”

Regarding performance, Domonic Sack sketched out the goals. “The idea was to minimize reflections, increase intelligibility, extend effective frequency response from 40 Hz up to 16 kHz, and with headroom to keep the system running at 20%, maybe 40% maximum at peak impact.”

The new system comprises eight hangs of 12 each PANTHER loudspeakers. All come with the 80-degree L horn. Potent bass power projects uniformly throughout the space from dual hangs of nine each 1100-LFC low-frequency control elements in cardioid configurations. The team also networked the entire system for control, monitoring and audio signal using the Milan AVB protocol, with redundant analog backup.

Two other key members of the project team included Metropolitan Interactive, responsible for rigging design under the guidance of Jeff Mele; and Geiger Engineering, responsible for assuring the structural integrity of all rigging points. Meanwhile, members of IATSE Local 13 handled the final rigging and flying of the system.

“The response to the new system has been overwhelmingly positive,” reports Pfitzinger. “I now have no problem lifting announcer Adam Abrams over the crowd noise when before he was often buried. Now it’s effortless. Nothing ever sounds pushed or distorted. It has clarity and impact, yet even when the music is up you still can carry on a conversation. And there is an incredible difference in the voice quality and clarity of the referee microphones.”

A Wide Range of Uses

The fan experience at Minnesota Wild games was the overriding consideration in specifying a PANTHER line array solution. However, the system will be useful for dozens of other events throughout the year. This includes high school and collegiate sports tournaments, annual rodeo and skating shows, plus special events and large-scale meetings associated with conventions in the adjoining convention center.

Although the system is not hung effectively for end-stage rock conferences, portions of it could function as delays or B-stage systems, according to Pfitzinger.

The City of Saint Paul owns the Xcel Energy Center while the Minnesota Wild operates it under a long-term lease agreement. Xcel Energy Center is part of an expansive campus of event, entertainment, and meeting venues. This also includes Saint Paul RiverCentre convention facility and The Legendary Roy Wilkins Auditorium.

Click on “View Slideshow” for images of the installation. All images courtesy of Luke Schmidt.