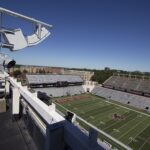 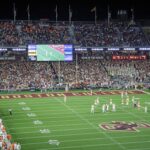 Powersoft amplifier platforms emerged as the key to a full audio overhaul at the 44,500-capacity Alumni Stadium in Chestnut Hill, Mass., home to the Boston College Eagles American football team.

The project began in earnest when system designer Idibri, a Salas O’Brien Company, responded to an RFP from Boston College. The institution wanted to install new audio systems around the stadium. This comprised the bowl itself to the concourses, suites, broadcast booths and press rooms.

“We were tasked with upgrading several generations of technology all at once,” explains Ben Boeshans, senior consultant for Idibri. “We started designing the project in the first months of the Covid-19 lockdown, meeting regularly with Boston College representatives online and dealing with all of the supply-chain issues as the project progressed.”

Boston College tasked Idibri with delivering a system that could provide clean, intelligible audio throughout the venue. At the same time, it needed to limit the amount of residual sound that would spill outside of it. Idibri then considered all its options. After considerate deliberation, the company decided that the Powersoft amplifier platforms would be optimal. Per the company, the platforms possess the power, reliability and efficiency over time to match the variety of speakers.

Ryan Knox, associate vice-president of Idibri, elaborates, “We needed 98 Quattrocanali in total, installed in seven locations around the facility. The primary signal is via Dante from Q-SYS, with an analogue backup; while all of the control is taken care of by a number of DiGiCo consoles.”

Idibri selected weatherized Fulcrum Acoustic FL283, FH15 series, CCX series and RX series speakers to serve as the PA system in the stadium bowl. Meanwhile, the field system consists of L-Acoustics Syva with KS21 subwoofers. The team outfitted all of the suites, press rooms, broadcast areas and concourses with a variety of QSC AD series speakers. They also had six redundant pairs of Q-SYS cores of various sizes for signal processing.

“Given the supply-chain challenges the industry is facing right now, we knew that we would encounter some hurdles,” says Boeshans. He then comments on the support from the local Powersoft team. “We worked closely with Powersoft and the project’s integrator, Diversified, to ensure that the specified products could arrive in time for the project; and we were even able to swap in more Powersoft amps when others couldn’t make the timeline.”

The audio team also made extensive use of the third-party Q-SYS plugin within the Powersoft amplifier platforms. They used this to control power status, implement backup strategy and engage in real-time system monitoring. The team implemented this alongside Powersoft’s HealthPlus software.

“Rick Woida from Powersoft provided some really useful guidance for us on programming the A+ file, as well as hanging out on site with us during commissioning and the first game,” adds Knox. “He also assisted in creating custom speaker presets for speakers that weren’t previously in the library and used A+ [ArmoníaPlus]’s error reporting to help us track down a few wiring issues.”

Boston College audio engineer Adam Ferguson summarizes, “Overall, we are impressed with the service and products Powersoft provided; particularly when you consider the supply-chain issues that they managed to overcome for us. They are a great manufacturing partner for this kind of project.”

Click on “View Slideshow” for images of the Alumni Stadium.