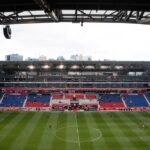 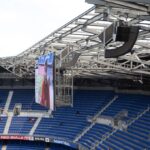 Opened in March of 2010, the 25,000-seat Red Bull Arena is home to the Major League Soccer (MLS) New York Red Bulls and the NJ/NY Gotham FC of the National Women’s Soccer League. Located in Harrison, N.J., it is the third-largest soccer-specific stadium in the U.S. and the league. Moreover, the Red Bull Arena now has improved sound in the form of a new L-Acoustics A Series loudspeaker system. The system comprises lightweight and compact A15i enclosures paired with SB18 IIi subs. N.J.-based global technology solutions provider Diversified designed and installed the system just ahead of the 2022 MLS season kick-off on February 26.

The A Series loudspeakers replaced the distributed sound system installed around the venue’s catwalks. “At the time, when soccer was really establishing itself in the US as a professional-league sport, the sound systems tended to be designed with value in mind,” explains Justo Gutierrez, Diversified director of AV & sound, sports and live events.

He goes on, “And typically, you didn’t need much for a PA system for a soccer pitch; the game is continuous, and the PA was used mainly for pre-and post-game and halftime announcements. But the sport has progressed and now requires sound that can support a lot more, including music.”

Gutierrez says the Red Bulls sought a high-performance, high-impact sound system with much higher output and full coverage of seating areas. They achieved this with a design that called for symmetrical arrays of A Series enclosures. Each was backed by SB18 IIi subwoofers, as well as two corner-fill arrays using A15i Focus. The design thus creates seamless sonic overlaps between seating sections. It also covers them far more consistently and smoothly than the distributed speakers, which focused only on “slices” of seating areas.

The arena’s roof — the largest canopy of all MLS stadiums at 322,276 square feet —extends 120 feet from the last row of seats to just past the field’s touchlines. Additionally, 60 feet of the roof is translucent to allow for natural light to cover all the seats. The low roof design is known for providing superior acoustics by amplifying and reflecting crowd noise back onto the field. However, thanks to the A Series’ highly focused dispersion, it doesn’t interact at all with the new sound system.

“The new speakers are positioned equidistant between the upper and lower seating tiers and are firing at the best angle and away from the roof, minimizing any reflections,” says Gutierrez, who worked closely with Red Bull Arena director of construction John Amorosa.

The new system — which incidentally utilizes the previous system’s cabling infrastructure, saving considerable costs on installation — is designed specifically for enhanced speech intelligibility and music impact. It not only considerably improves the stadium’s sound but also helps make it more attractive to touring shows. Here, they can connect to the new speakers and use them as supplemental delays for music performances. “That’s a huge factor now for attracting touring shows,” Gutierrez adds.

L-Acoustics says it worked closely with Diversified and the Red Bull Arena project team, spearheaded by Amorosa and AV engineer John Nicklas, on the system design beginning in 2018. They stayed in touch as the pandemic shuttered all sports activity for much of 2020, continuing to refine the design. “The Covid lockdown delayed the project significantly, but the Red Bulls team was fully committed to keeping the project on track and on budget, despite a huge financial deficit incurred by MLS during the pandemic,” says Dan Palmer, L-Acoustics business development manager, sports facilities – USA and Canada.

The newly-installed system primarily contains 96 A15i Focus and one dozen A15i Wide enclosures for additional vertical coverage where needed. The design also called for four arrays of seven A15i for the North, South, and East zones and four arrays of six A15i for the West zone. Each pairs with an array of three SB18 IIi for additional LF impact. Two small corner-fill arrays of two A15i Focus each are used in the NW and SW corners. This completes the bowl system and ensures full coverage and even SPL distribution over the audience listening areas.

Fifteen amplified controllers control and power the system. Here, 14 LA12X and one LA4X is flown from the venue’s steel canopy structures and rigged under a tension-fabric curved exterior shell of PTFE fiberglass wraps, utilizing a custom rigging design created by the Diversified team. The pairing of A15i and SB18 IIi thus provides a balance of full-range, high-impact performance. The A15i extends down to 41Hz and is aligned with SB18 IIi. This extends the LF response to 32Hz. At the same time, it maintains a compact visual footprint and light enough weight to meet the load requirements of the venue’s canopy. Gino Pellicano of L-Acoustics calibrated the system in coordination with Diversified and Red Bull Arena management.

The system is also fully weatherized to IP standards. Specifically, it is IEC 60 529-IP55 rated and MIL-STD-810G rated, as well as ISO 105-B01-UV protection. All of these are critical for an outdoor venue in the Northeast. That protection extends down to the fit and finish of the system. Additionally, the sealed connector plates, gland nuts and highly durable hardware meet the rigorous demands of professional and collegiate outdoor stadium installations.

The new L-Acoustics A15i sound system is in fact part of a wider sound upgrade that also included the installation of a DiGiCo Quantum225 mixing console and new Dante-native DQ-Rack for front of house. Together, it will serve the Red Bulls and other venue stakeholders for years to come.

“Between how even the coverage is and how musical and impactful the rig sounds, we couldn’t be happier,” shares Red Bull Arena AV engineer John Nicklas. “The Soundvision models were impressive and accurate, and L-Acoustics went above and beyond to make their delivery on time, despite the logistical challenges. Both L-Acoustics and Diversified provided exceptional service and attention to detail. The PA they’ve installed is a total game-changer for us and we’re looking forward to bringing our sports fans a new sonic experience here at Red Bull Arena.”

Click on “View Slideshow” on upper-right corner for images of the L-Acoustics sound system at the arena.