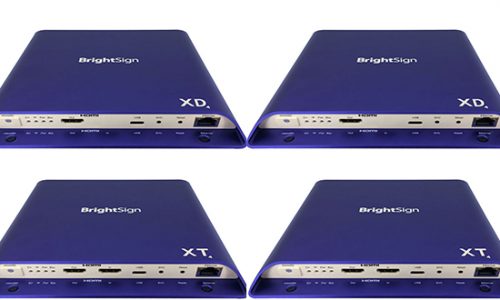 BrightSign recently announced it will introduce the first of its Series 4 players, BrightSign Series 4 XD4 and XT4, at ISE 2018 in Amsterdam next week [Hall 8, Stand G-240].

The XT line will support PoE+ and XT1144 supports HDMI In to deliver Live TV to endpoints either via an HDMI cable or streaming over a network. The new players will continue using the patented industrial design of the Series 3 players.

“We are constantly looking to improve our award-winning players and build-in support for the newest video formats,” said CEO Jeff Hastings in a press release. The new models offer support for the latest, most advanced standards in 4K HDR, Dolby Vision and HDR10+.”

The company will showcase three of its BrightSign Built-In DSM (digital signage module) integrated solutions – the iDisplay by Outform, as well as a range of displays from AVNU and Industrial Image.

The company announced the shipment of its one millionth media player in August 2017, wrapping up the company’s strongest calendar year along the way.

“It’s pretty gratifying to think that there are now more than a million BrightSign players out in the field, powering rich digital experiences in dozens of countries across the globe,” said Hastings.

“This accomplishment is testament to the dedication of our engineers and sales force, but most importantly our customers – their faith in us enabled rapid growth that helped cement our place as the preferred media player for virtually any digital signage application.”