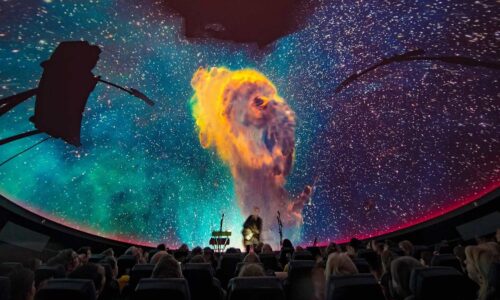 The Stardome Observatory and Planetarium in Auckland, New Zealand – the largest in the country – has been wowing visitors since it opened in 1967, and it just got a massive audio upgrade to support a wide range of events held at the facility thanks to HARMAN Professional.

The venue, which also functions as an IMAX theatre and live performance venue, needs a versatile sound system to support a wide range of events with easy-to-use systems.

“The primary use of the system is to provide an immersive 5.1 cinema experience, but the theatre also doubles as a live performance venue for small bands and events—everything from strings to electronica,” said Darian Sundar, Director, Avid Automation. “So, in addition to offering an accurate cinematic experience, the system needed to be capable of handling larger SPL to accommodate live performances.”

For the theater’s surround sound system, Avid Automation and JPRO selected a range of JBL AE Series loudspeakers, including:

For amplifiers, Avid Automation and JPRO selected Crown and BSS solutions, including:

For hands-on control, the integration firm and distributor selected:

Avid Automation also collaborated with Stardome organizers to design a custom user interface to make the system easy and intuitive for staff and volunteers to use.

According to Sundar, this system was a significant investment.

“The venue is open to the public with performances six days a week, requiring the system to work day-in and day-out. Localized support, reliability and versatility were key in our decision-making.”