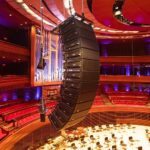 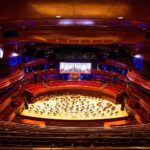 After an extended pandemic hiatus, it reopened to the public in September of this year. It debuted its new Meyer Sound system with an amplified Philly Pops concert series showcasing Frank Sinatra’s music.

The original Meyer Sound system, based on a center cluster of MSL-4 loudspeakers, had been a stalwart performer. However, the director of production, Andre Barette, emphasized the need for an audiovisual upgrade.

“Certainly, the success of the prior system played into our decision, particularly regarding longevity and customer service,” Barette noted.

He also added that the old center cluster would have been a visual impairment because of a new video screen. As a result, the new system, centering on twin arrays of 12 LEOPARD line array loudspeakers, split left and right. According to Barette, the arrays provide more power for soundtracks and other acoustics.

“For multiple reasons, we felt that the LEOPARD-based solution was the best fit for our hall. It demonstrated the versatility we need to meet all the musical styles presented here,” remarked Barette. He also acknowledged that the sleek look of the arrays worked well with the hall’s aesthetics.

Specifics of the Meyer Sound System

Most of the hall seating is covered by the twin LEOPARD arrays. There are nine LEOPARD-M80 versions for the longer throw over three standard versions for nearer seats. The wrap-around seating is accommodated by mirror image flown subsystems on each side. Each has single ULTRA-X40 and ULTRA-X23 loudspeakers on the upper bar with two ULTRA-X40 loudspeakers and a single ULTRA-X20 on the lower bar.

Along with this, deep bass reproduction is supplied by six ground-stacked 900-LFC low-frequency control elements. These are divided in a cardioid configuration with three per side.

Interestingly, the Philadelphia Orchestra itself is not amplified through the system. Instead, the new loudspeakers are utilized for dialogue and effects in a film series for which the Orchestra performs the score. On the other hand, concerts for the Philly Pops and Kimmel Campus Presents series are amplified usually.

The system was designed by Bob McCarthy, director of system optimization, Meyer Sound. DBS Audio Systems served as the integrator, with Chicago-based Threshold Acoustics as project and acoustics consultant.

Additionally, the custom rigging for the side hangs was engineered and fabricated by Mountain Productions of Wilkes-Barre, Penn. Finally, Matías Tarnopolsky, president and CEO of The Philadelphia Orchestra and Kimmel Center Inc., played a major role in the system’s evaluation and selection.

“Simply put, Meyer Sound is the best,” Tarnopolsky stated. “We were looking for a system that creates a natural sound to ensure artists and audiences always have the best experience. We have put the system through its paces on numerous occasions and are thrilled with how it is performing.”

“The new system has been extremely well received,” Barette said. “The comments have been overwhelmingly positive. The loudspeakers put out a lot of sound for their size, and we love how controlled and directional they are. With our excellent concert hall acoustics, it’s critical that the amplified sound be crisp and clear in every seat…from the front row to the upper balcony.”

Please click on “View Slideshow” on the right for all photos of the new Verizon Hall.