Today’s movie goers expect a next-level experience. After all, they have plenty of streaming content options. EVO Entertainment understood this when it opened a 73,000-square-foot multiplex in Schertz, Texas – and it leaned on AV to dial up the experience.

The new 10-screen, dine-in cinema includes two massive EVX screens, 16 bowling lanes, an arcade with more than 70 games, an outdoor patio, a full restaurant and bar, and three private event rooms that can be used independently or combined into one large space.

When envisioning his latest enterprise, EVO Entertainment Group founder and CEO Mitch Roberts — grandson of Cinemark founder Lee Roy Mitchell — wanted to create an experience similar to its predecessors, but with a much greater emphasis on AV technology.

He wanted guests to be immersed in a high-tech wonderland as soon as they walked in the door and dazzled throughout with an abundance of displays and video walls showcasing a range of content. For help with the AV solution, Roberts called on Mood: Texas. 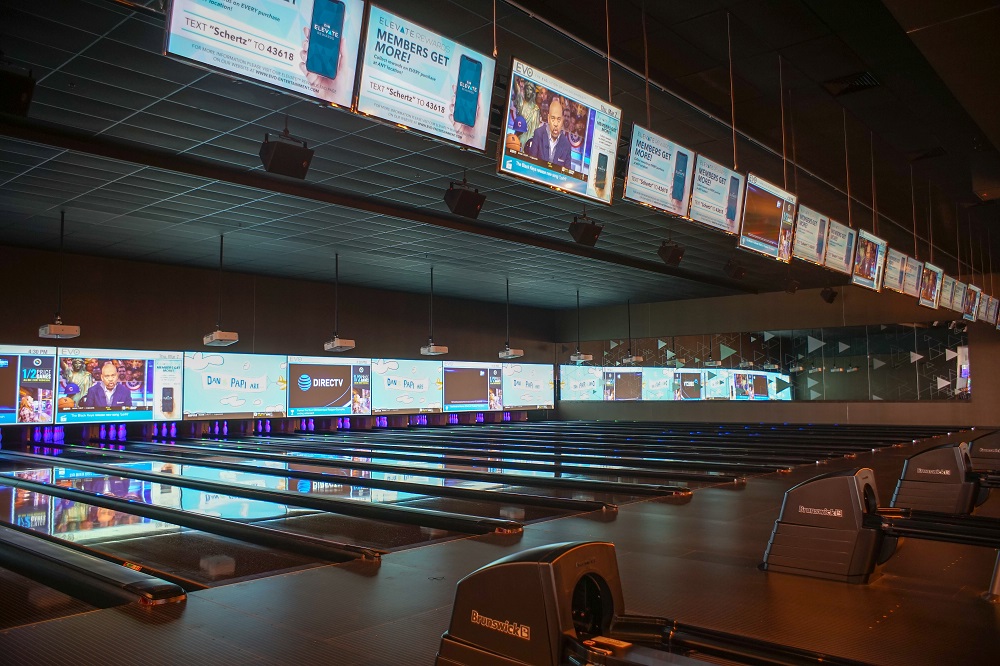 Inside the EVO Entertainment AV Challenge

With so many screens located throughout the multiplex, cost-effective and reliable video distribution was a critical aspect of the project.

With so many screens located throughout the multiplex, cost-effective and reliable video distribution was a critical aspect of the project.

To reduce costs and failure points, any display or video wall dedicated to a unique source was outfitted with a local digital signage player located in a recessed equipment box.

These include a 6×3 video wall and automated screens for purchasing tickets in the lobby, and ultra-stretch digital signage displays and a three-panel off-axis video wall in the promenade, among others.

For the remaining 48 screens, a video distribution system was required to deliver any rack source to any screen. Furthermore, the system had to be exceptionally easy for staff to use, as well as guests in the event rooms. 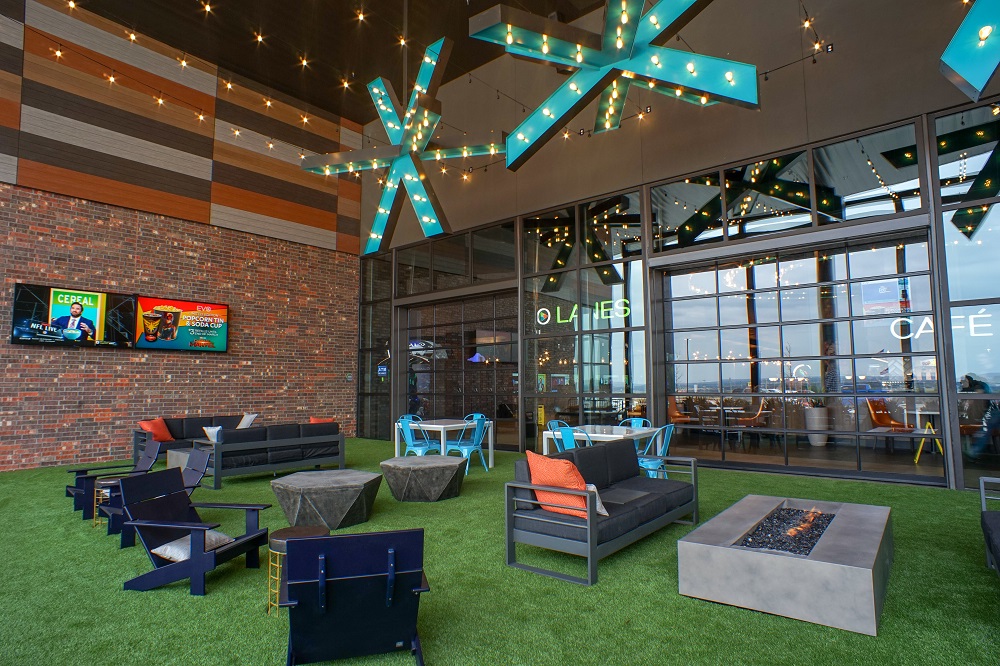 Inside the EVO Entertainment AV Solution

“Before the Schertz project, we had provided a few smaller technological upgrades in other EVO Evolution locations, so Mitch knew what we were capable of,” says Andrew Adams, senior account executive, Mood Texas. 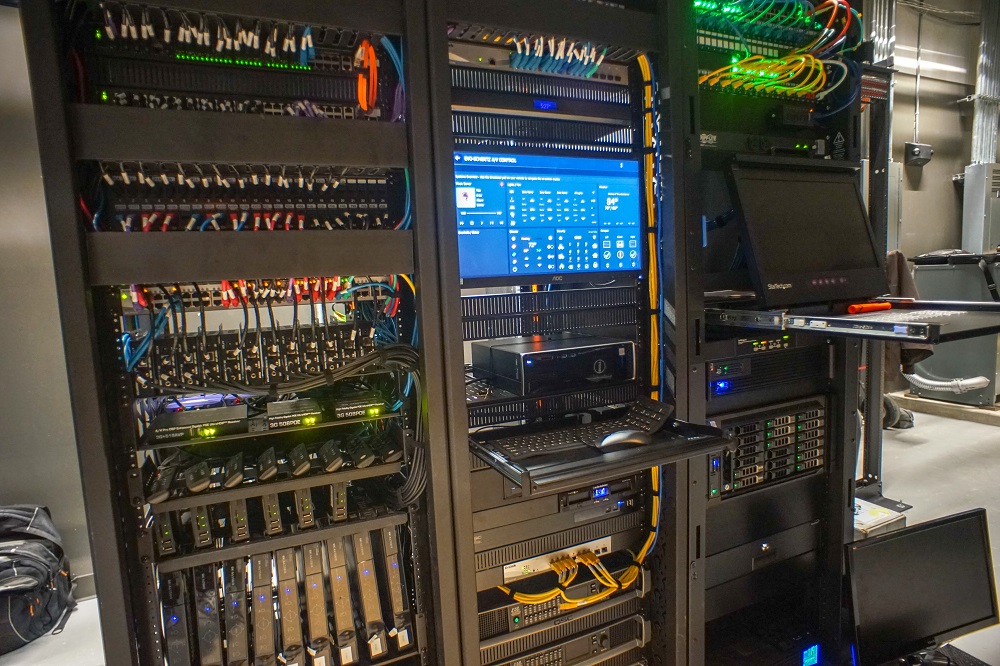 “But the massive scale of this project gave us a unique opportunity to really shine and deliver something special for the multiplex’s patrons. To do that, we required a cost-effective video distribution system that provided scalability, fast switching, and unmatched reliability.

“Just Add Power checks all of these boxes and we’ve had nothing but success using their AV over IP solutions. It was an easy call to rely on them here.”

Video wall functionality is built-in for displays installed in portrait and flipped configurations as well as image push, pull, and pop features. An integrated scaler on the receiver automatically adjusts the picture to fit the screen.

Each of the multiplex’s 12 rack sources is equipped with J+P’s VBS-HDIP-707 PoE transmitter. J+P’s VBS-HDIP-508 PoE receivers are attached to the 20 panels of the bar’s wraparound video wall.

J+P’s VBS-HDIP-508 PoE receivers are attached to the 20 panels of the bar’s wraparound video wall — configured as 8×2 on the long side and 2×2 on the short side — eight projectors and displays in the bowling alley, six 43-inch portrait panels located outside the facility’s bathrooms, two Sunbright screens on the patio, and a 65-inch display in the billiard room.

In addition, each private event room features a display with a J+P receiver, as well as a J+P 3G+WP2 wall plate transmitter to allow guests to play video from their laptops.

The Ultra HD Over IP platform is engineered to provide complete scalability, so expanding the system with an additional screen or source is as simple as adding another receiver or transmitter. 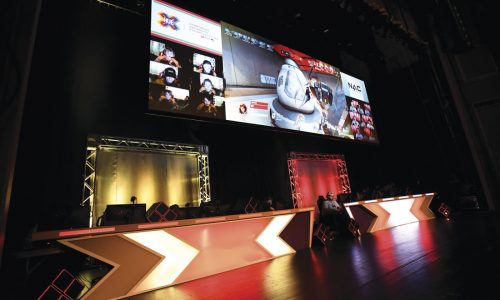 Related: Integrators, You Need to Consider the Esports Technology Market (These Schools Already Did)

They can send any source to any display with a single button press, and easily change the layout for the video wall in the bar. Options include one large image across all 20 displays, 20 independent images, or separate images on five 2×2 video walls.

In addition, Mood Texas wrote a script for RTI that turns the video wall into one large image welcoming patrons to the multiplex at scheduled times throughout the day. For control over displays in the event rooms, each is equipped with a KX3 3.5-inch in-wall touchpanel keypad. The touchpanels are also capable of controlling multiple rooms when combined. 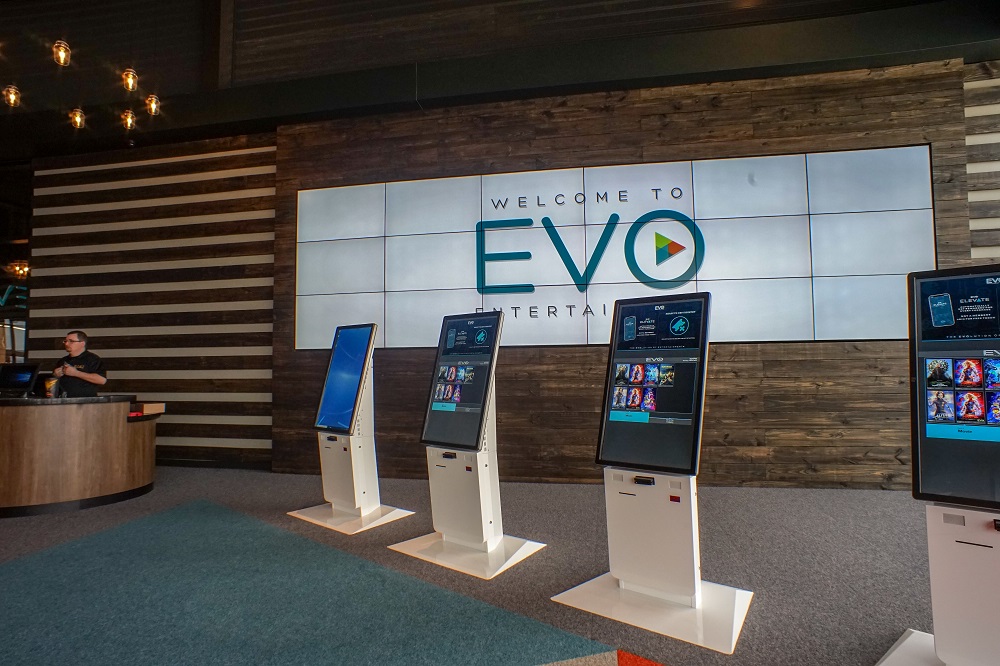 “With Just Add Power, we were able to turn Mitch’s vision into reality and exceed his high expectations for performance, while keeping costs to a minimum,” Adams says.

“Working on the EVO Entertainment project provided me with the rare opportunity to design a system that I would actually enjoy as a customer,” says Mood:Texas’s Eric Ramay.

“The Just Add Power system has performed flawlessly, easily handling distribution to a wide variety of displays across a truly massive facility. And by relying on nothing more than Cat cable, it greatly simplified the installation process, which was significant, as we were under a tight deadline to complete the project in time for the soft open.

Furthermore, with RTI, employees were able to begin using the system with very little training.

They are amazed at how easy it is to send content to any display or control the video wall. We couldn’t be happier with how this project turned out and hope to put these solutions through the ringer at another EVO Evolution location soon.”

Not only that, Mood: Texas is also in a unique position to monitor the results of project. “Working on the EVO Entertainment project provided me with the rare opportunity to design a system that I would actually enjoy as a customer,” said Eric Ramay, system design developer, Mood Texas.

“I have two young children and we regularly visit the Shertz location. Each time I’m reminded how our work really set the multiplex apart in terms of style and the customer experience, and it’s a great feeling knowing that we took part in that.”