It’s easy for people who don’t understand anything about esports technology to dismiss this new media as a passing fad or a trend that keeps their children from doing their homework. But there’s a huge opportunity for AV integrators to capitalize on what’s becoming an unstoppable force.

The esports market represents a multi-billion (that’s billion with a B) landscape that’s been making its way to early-adopting colleges and universities and will likely soon be coming to a high school near you, especially as higher education institutions have made it a scholarship sport. 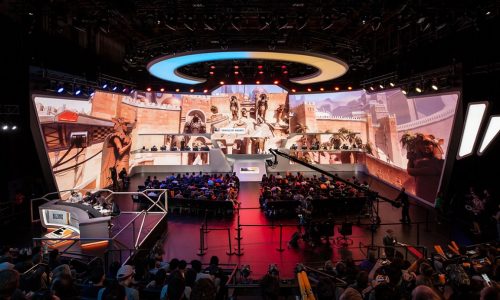 For the uninitiated, “esports” refers to live-play video game matches in special venues or on YouTube channels.

The industry is fueled by highly-engaged and AV tech-acquainted fans. In 2017 alone, investors sank almost $150 million into 34 esports deals, according to sports business reporter Darren Rovell.

Fans of esports are typically more engaged with their surroundings during live events — be they at a physical, common location like an arena or convention room, or in online settings like a group chatroom on Discord or Twitch, says Premier Mounts marketing coordinator Brandon Breznick, a gamer himself.

The ability to broadcast live play is equally important for an arena-setting event or an online-only one, he says. Integrators seeking esports technology jobs must be equally adept with live broadcasting as they are with screens and typical event AV, says Breznick.

While professional esports leagues have been around for about a decade, collegiate teams are relatively new, says Harrisburg University president Eric Darr, whose school is perhaps the model all others will follow when it comes to creating an immersive, tech-packed esports arena.

Harrisburg’s esports stadium is part of the Whitaker Center, which features a science and art museum along with the esports training center and digital laser theater, which is a 700-seat performing arts theater equipped with a 44-foot-wide IMAX screen. 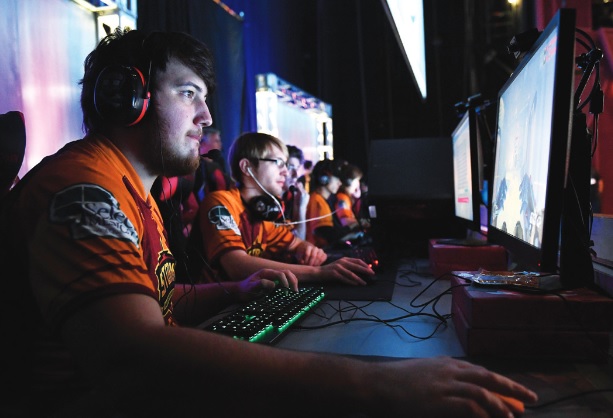 The university spent about $750,000 to transform the space, says Darr.

There’s ample room for players, coaches and spectators and a large screen on one wall to allow fans to keep up with the action without huddling around one screen.

The investment was part of the annual budget approved by Harrisburg trustees and got support because of the benefit to the students themselves and the marketing opportunities for the school as a whole, says Darr.

The teams have gotten sponsorships for their computers, headphones and chairs, he says.

Although Harrisburg is home to about 7,000 students interested in science, technology, engineering and math from 103 countries, its esports teams were the first time it offered varsity sports, says Darr.

Why esports? For one thing, it’s the second-most watched sport in the world, he says, attracting more than 20 million people on any given night. Harrisburg University launched its esports varsity teams—dubbed the Storm—in January 2018.

Players focus on Hearthstone, League of Legends and Overwatch.

Darr, who’s been playing video games himself for more than 20 years, is impressed with the early returns on Harrisburg University’s investment.

“It really brings the community together,” he says. “It’s something to get behind. It’s also a way for the university to build its brand.”

To that end, Harrisburg’s esports teams have been featured on the main page of ESPN’s website multiple times, thanks to their success, with the League of Legends team ranked fourth out of more than 300 entrants.

St. John’s University is another college with an impressive esports presence, one that’s already “bursting at the seams” after it opened in part of an old computer lab that also includes 3D printing, multimedia editing and virtual reality with 12 stations, according to director of academic technology Eric Alvarado.

SJU is part of the Big East’s League of Legends and Rocket League esports entries and other teams—including Hearthstone, Overwatch and Call of Duty—have emerged as unofficial esports options on campus. 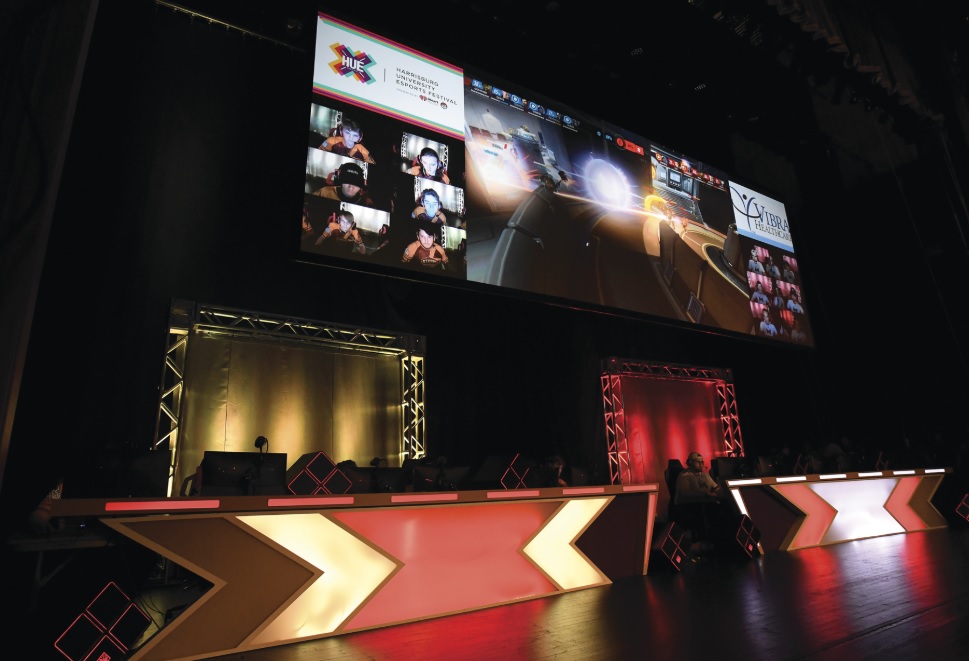 St. John’s spent about $6,000 per station, says Alvarado, and is already pushing to add more esports stations in other parts of the campus along with exploring a dedicated esports space.

“The space turned a lot of heads,” says Alvarado.The arena is a featured part of the St. John’s campus tour for potential applicants, he says.

Breznick says esports are still in an “early-adoption phase,” meaning that spaces which host them are typically more general-purpose, retrofitted for these events. The integrator has to be able to work with existing architecture, deciding on video wall variables and ideal placements.

But there are some esports arenas built exclusively for esports, and Breznick says integrators have a unique opportunity to get in on the ground floor.

What Integrators Would Need To Know

“Getting in with those architects and consultants early lets integrators make calls on trusses and architectural support systems that will bolster their installations later,” he says.

Obviously, integrators with large venue and event space integration experience are a perfect match for the esports technology market. But those with live broadcast experience might have more of a leg up.

Harrisburg University represented the first foray into esports for New Era Technology. Staff looked at the installation as a traditional video wall job but learned there was much more involved and a much larger opportunity in the esports space than they realized.

It went from a simple construction project to one that needed IT infrastructure and New Era-PA’s design team, says Mike Morgan, the company’s GM/business development manager for central Pennsylvania.

After the Harrisburg University opportunity came to them about 18 months ago, New Era-PA put together a team that interviewed gamers and fans of esports “so we could educate ourselves and see what the bigger picture was,” says New Era-PA director of design Susan Lucci. 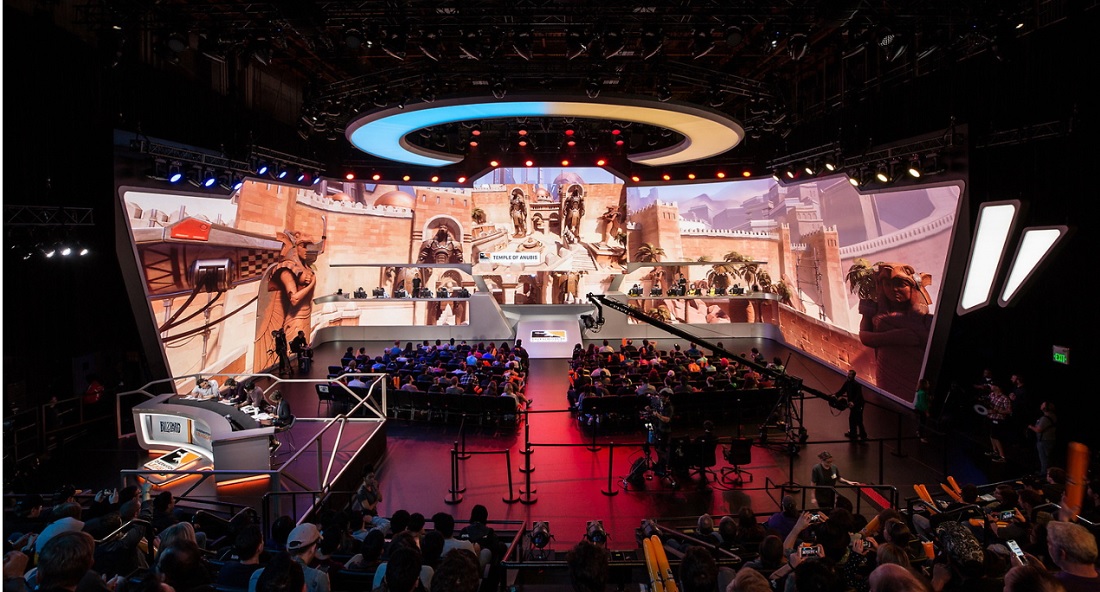 “We saw there was a lot more in this than we knew,” she says.

In the Harrisburg project in particular, acoustics presented a challenge, says New Era-PA project design manager Doug Malora. Each player has his or her own work station and they communicate on headset, either among the team or with the coach.

With glass, high ceiling and exposed ceilings that were designed by the architect, New Era had to cut down on the reverberation time with absorbent material but without using acoustical treatments to cover the ornate design.

Brian Hayes, senior design and sales engineer at IVCi, expects the St. John’s University job to be the first of many for his company in esports. Gaming represents a $900 million market in 2018 and that could grow to $1.4 billion by 2020.

“If you’re not aware of it or involved in it, you’d be doing an injustice to your customers as well as your company,” says Hayes. “If we didn’t go down the path, we’d be foolish. The future is very open.”

Aurora’s IPX-TC2 was used in the Harrisburg project — it’s an IPBaseT technology which synergizes various IP/AV standards to work together as one and supporting video walls up to 16×16.

IVCi called on the Crestron NVX system to serve as the heart of the St. John’s installation, knowing that lag time was of premium importance in esports competitions.

Ron Epstein, senior public relations manager for Crestron, calls esports “a new and interesting use case” for NVX, noting “there’s a pathway to a career here” for gamers.

While NVX wasn’t built specifically with gamers in mind, Epstein isn’t surprised it’s being used in that space, especially after seeing it work so well in the casino market at the Peppermill Sportsbook.

“We’re always on the forefront of technology,” he says. “Sometimes these solutions don’t seem as obvious until you’re talking to the end user about their pain points.”

Gaming as an AV Recruiting Tool

New Era-PA VP of sales and marketing John Greene recommends integrators who pursue esports have someone on the team who “speaks the language.”

“These athletes know a lot about technology,” he says.

Morgan isn’t surprised to hear Harrisburg University is attracting new students as a result of its esports success.

“It’s not only functional; it’s also a recruiting tool,” he says.

“With video games, there are many simple setups where the console uses HDMI to hook into a display,” says Breznick.

“For kids who grow up gaming, that’s an essential concept. When you have a kid in one of these esports arenas look up and see a video wall and is in love with the environment they’re in, you can tell the kid that they can be involved in this.”

St. John’s is looking at bringing high school esports competitions to campus and has seen the college of professional services incorporate esports into several majors and class offerings, including sports management, science and mass communication, with options including video game design and video game animation.

Crestron’s Ron Epstein wonders how many of today’s gamers will be tomorrow’s integrators. Video games can help with hand-eye coordination and developing a more strategic mindset, he says.

“It used to be,‘stop playing video games and do your homework,’” says Epstein. “Now it might have flip-flopped. Education is an evolving thing.”