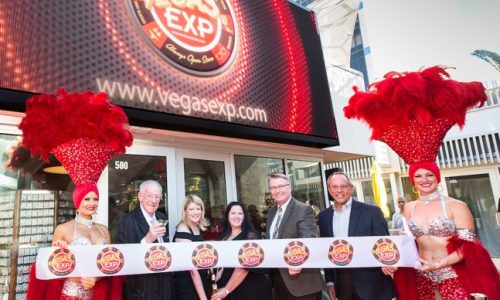 We can’t help but wonder if some of the thousands of people who converged upon Las Vegas this week for CES 2018 decided to look for something unique outside the Las Vegas Convention Center when the lights went out for about 90 minutes Thursday during the now-infamous CES Blackout.

If so, we’re guessing those who were looking for one of the cool new interactive shopping areas with interactive technology stopped at Vegas EXP, a 3,200-square-foot retail store located in the Grand Bazaar Shops on the Las Vegas Strip that opened last summer.

The store’s self-contained mini-mart sells liquor, wine, beer, tobacco products and snacks, whereas the rest of the store offers a wide assortment of Las Vegas collectibles and apparel.

While Vegas EXP sells much of the merchandise you’d expect to see in a retail establishment on the Strip, what sets the store apart is how it sells to customers.

A total of 28 screens are located throughout the store, displaying featured products and other promotional content.

Behind the scenes, 16 BrightSign HD1023 media players each push content to a pair of dedicated screens via HDMI splitters. This enables Vegas EXP “to tailor content based on the screens’ locations to effectively target customers as they browse the store,” according to the press release.

The store’s highlight is a 55-inch interactive LG touch screen prominently located in the heart of the store. When idle, the screen displays notable Instagram feeds and the local weather forecast, among other content.

When customers engage with the display, they have the option of shopping the store’s online product catalog to purchase and ship products directly to their homes.

The large display also offers a “selfie mode,” whereby customers can scroll through and take selfies in front of various iconic Las Vegas backdrops. The content – developed by creative firm Insteo – is pushed to the display via BrightSign’s XT1143 media player.

It may look like a typical tourist shop, but this is a showroom for the contemporary interactive shopping experience.

Vegas EXP plans a number of improvements to take advantage of its digital signage infrastructure.

For example, using BrightSign’s Bluetooth/beacon integration, it will be possible for Vegas EXP to ping customers via their mobile phones as they enter the store, and track their in-store progression to better understand the store’s most frequently traveled traffic patterns.

Read Next: The Future of Touch Screen Technology: It’s Getting Smarter

Once connected via customers’ mobile phones, the store can target them with post-visit promotional offers and incentivize future visits with limited-time in-store discounts.

Additionally, Vegas EXP is in the process of deploying Rockbot running on BrightSign players. Rockbot is an entertainment platform that enables customers to interact with in-store signage via their mobile phones, crowdsourcing the store’s audio playlist in real time.