People making their way down Madison Avenue will find themselves drawn to the new Chase Flagship Branch at 390 Madison, featuring a custom LED system designed and integrated by the team at ANC.

The digital media system is fully visible from the street and features two circular rotundas of transparent LED video displays within the north and south sides of the branch, helping to blend architecture with functionality.

The flagship location, one of Chase’s largest and most innovative of branches, integrates the latest digital technology, amenities and design elements that will create a unique and modern space for customers and employees,” according to Chase’s media release about the branch’s opening.

Working closely with the project architect, Spectorgroup, and construction team, ANC was an integral part of bringing the venue’s concept to life from planning and design; product suggestion and selection; to installation and content creation. 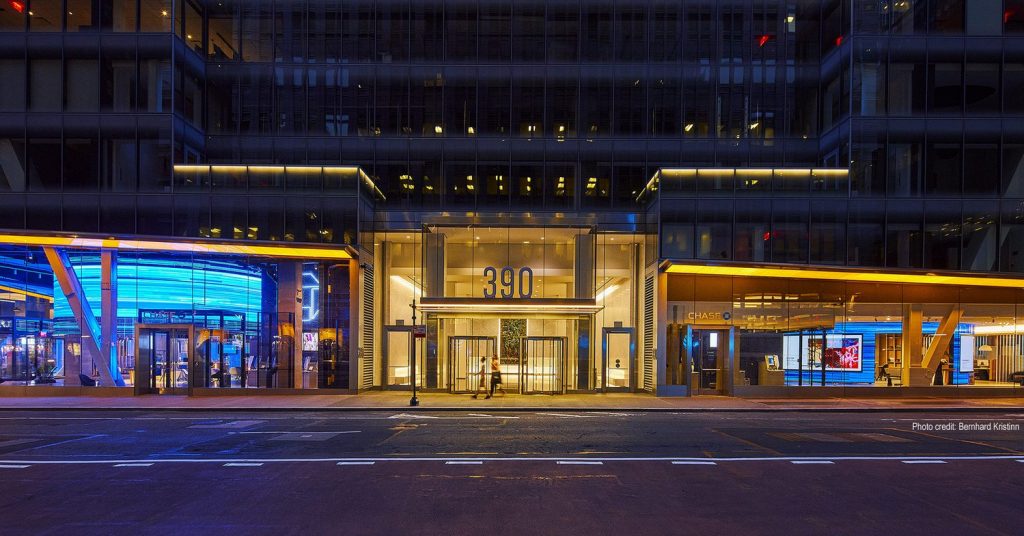 Inside the Chase Flagship

When visitors enter the south side of the Chase flagship branch, they will be greeted by a curved LED display suspended above the branch floor, measuring approximately 118 feet in circumference and standing more than 10 feet tall.

The display features a high-resolution section that features more pixels than the large HD video screen at Yankee Stadium.

Flanking the top and the bottom of the display is a curved transparent LED display, helping expand the canvas throughout the space. The south rotunda also features four video walls, totaling 36 total LCD displays with 4K capability.

The display within the north side includes four separate high-resolution video screens which are surrounded by the same transparent technology in the south side. The transparent displays of the north and south sides cores feature custom flexible LED panels which were assembled offsite and attached to the structure at the branch.

Apart from the technology integration, ANC worked directly with Chase to implement creative content and visual themes that are displayed throughout the network, which incorporate branded Chase moments.