The Atlanta History Center may be the only place in the world where you can see a movie projected on a historical painting—and you can learn a little bit while you’re marveling at the technology behind the massive 49-foot-tall, 370-foot-wide canvas surface that curves both horizontally and vertically and is suspended from the top of the structure and weighted at the bottom.

Jackson McQuigg, VP of properties for the Atlanta History Center—who was in charge of overseeing the entire project—emphasized the importance of using Atlanta-based companies to tell the story of the Civil War’s Battle of Atlanta inside the Cyclorama space by projecting images onto the historical painting.

That worked well for the integrator, Communications & Entertainment Inc. (CEI), and Digital Projection, which provided five HIGHlite Laser II projectors for the unique and massive undertaking.

“When I found out what the project was, we were very interested—and I made that real clear,” says Val Dempsey, CEO of Atlanta-based CEI. “It’s of historical significance to Atlanta. The painting in its own right and how it evolved in the last couple of years has got a bit of a wow factor to it because of how it was built and the people who are involved with it.”

The Battle of Atlanta painting deteriorated before being restored and moved in 2017 from Grant Park to the Atlanta History Center. The canvas is particularly unique because the painting is curved, says Terry Frye, director of engineering at CEI.

The Atlanta Cyclorama—which depicts a Union-won battle from the Civil War—was painted in the 1800s by German painters for a show in Milwaukee. The painting was altered in the 1890s to depict a Confederate victory but has since been restored to its original design. The show features five separate video clips running simultaneously, one for each projector, says Frye.

The audio is synchronized to be played in the location nearest to where people appear in the film using Alcorn McBride storage and show control. The soundtrack is played over a 16.1 surround sound system. Visitors can also access the show through an assisted listening program, which can provide descriptive audio and a Spanish translation.

Frye went to Los Angeles to be trained on Alcorn McBride’s new show controller before incorporating it into the Atlanta Cyclorama installation. The venue also includes a Crestron control system, Extron video connectivity, TVOne and Magenta fiberoptic media converters, JBL for speakers and sound and QSC Q-SYS audio and sound processing. The video portion of the show was created by Cortina Productions, who designs and produces multimedia experiences for museums.

Atlanta has one of only 16 Cycloramas in the entire world and one of only four remaining in the U.S. [only two are functioning: the Battle of Atlanta and the Battle of Gettysburg], so there was some level of pressure to ensure the final product lived up to the tremendous billing.

“We specialize in specialty projects. To have Val reach out to us for something right in our backyard was something very special to us,” says Scott Smith, regional director for Digital Projection.

“The biggest challenge for us was the building and the structure,” says Dempsey. “It’s very tall, like a silo, it’s concrete, it’s all hard surfaces. There’s a lot of reverb. I don’t think we could have put enough sound-proofing [recommended by project consultant Bill Thrasher] in there but it certainly helped with the intelligibility of the show.”

In addition to the massive painting and projected show, the Cyclorama features a diorama with statues and a railroad running through it.

“The challenge was understanding audio and working with the recording company with the placement of the speakers,” says Dempsey.

“When we went to hang the first projector, we noticed a vibration coming from the deck,” so McQuigg hired a structural engineer to design platforms that came up to the deck, says Dempsey. That made the edge blending work, but not without a lot of math–and overnight work by the CEI staff. 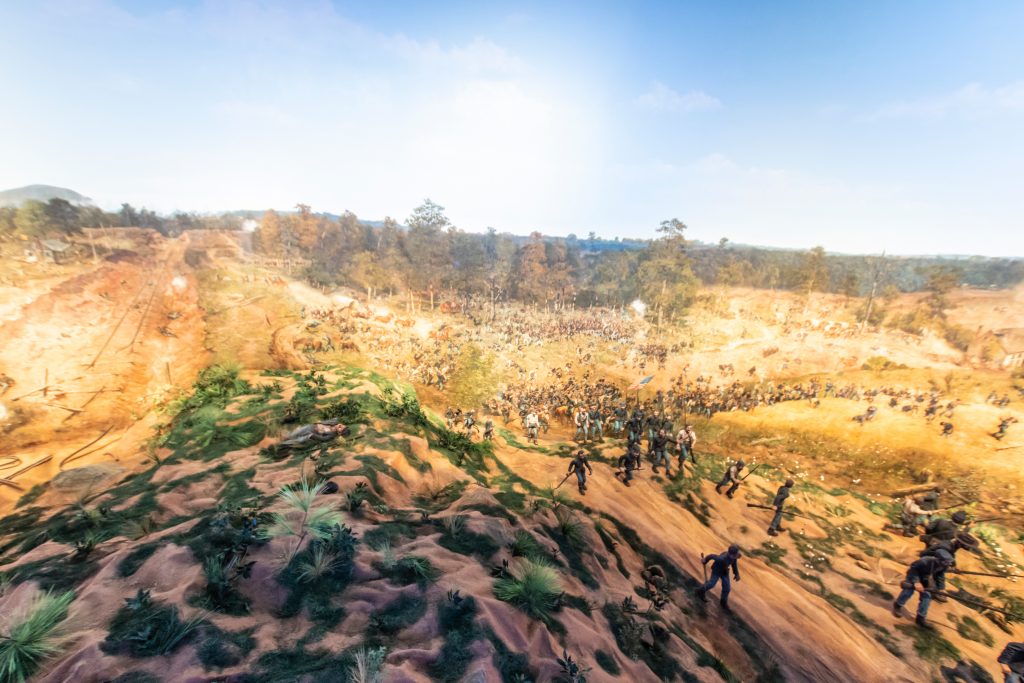 History in the Round

In addition to providing acoustical challenges because of the canvas surface on which the 12-minute Cortina Productions film is projected and the mural is painted inside the concrete cylinder, the surface curves in two directions with no two distances exactly the same from the projector lens.

“The biggest challenge on every project is the timeline as everything crunches at the end,” says Dempsey. “You can’t extend the opening date or the VIP parties. They were not moving.

“This was a pretty unique project on a very tight timeline,” says Smith. “Things come up on all projects. I think it was a great partnership.”

In addition to shows every day for visitors to the Atlanta History Center, the Cyclorama room gets rented out for special events too, says Frye. They added input plates for HDMI and mics to give the space more versatility.

“That added another layer to this,” he says.

After someone starts the show, the controller dims the lights and starts the 12-minute movie and synced soundtrack. At the end of the show there are landmarks that come up around the room using GOBO projectors to show the audience members where they are in relation to modern-day Atlanta and surrounding areas. Then, the images fade out the lights come back up automatically.

“We literally made this one-button simple. All they have to do is push play,” says Dempsey.