A movie-themed town in Shandong province is attracting visitors with stunning projections displayed by Christie HS series laser projectors. The project is aimed at injecting more vibrancy and engagement to the popular nighttime tourist attraction.

Known as Huayi Brothers Movie Town, the filmmaking facility in Jinan city has an area of more than 27,000 square meters. It also features buildings with architectural designs reminiscent of the late Qing Dynasty and early Chinese Republic era.

Detailing Specifics of the Project

To raise its profile, the movie town illuminated its iconic ancient-style city tower using 17 Christie D20WU-HS and D13WU2-HS laser projectors. They were installed and commissioned by Wincomn Technology, who served as the project’s general contractor.

The projections are among the biggest highlights of this nighttime attraction, delivering a multi-sensory viewing experience for all visitors.

Chen added that the project utilized various technologies and special effects to extend visitors’ stay and develop Jinan’s night economy through the allure of film art and culture.

April Qin, sales director for China, enterprise, Christie, further emphasized the importance of the town. According to Qin, it served as the shooting site for films or TV series and then transformed into a local landmark with the glamor of celebrity and showbiz.

Christie revealed that its HS Series offers a reliable and cost-effective option for almost any high-use application. Additionally, it ranges in brightness levels from 7,000 to 20,000 lumens and has resolutions including WUXGA, HD and 4K UHD.

The Christie HS Series projectors are fitted in a projection booth. Image courtesy of WinComm Technology.

Wincomm fitted D20WU-HS and D13WU2-HS projectors in a projection booth overlooking the city tower to display a slew of visuals measuring 74 meters wide and 30 meters high.

Plus, the company conducted a detailed field-of-view analysis to determine the architectural characteristics of the projection canvas. This was done to ensure that the imagery displayed on the various surfaces would exhibit a uniform and consistent look.

A gauze screen was also installed over the city gate to ensure that the projections were free from distortion due to the hollow space around the gate.

Analyzing the Success of the Installation

“The project is a brilliant initiative to bolster Jinan’s night tourism credentials, and we are delighted that our HS Series laser projectors have been deployed by Wincomn for this fascinating projection mapping show,” remarked Qin. 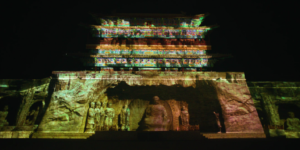 As a result, visitors are treated to an array of stunning visuals ranging from blockbuster film excerpts to lifelike images of flying cranes and soaring dragons, famous Buddhist grottoes, and relics of Longshan culture dating back to the Neolithic period.

Christie concluded that the popularity of its HS Series has made it the trusted choice for other numerous large-scale cultural, entertainment, and tourism projects across China.

Some of those projects include the Shanghai Astronomy Museum, Journey to the West theme park in Huai’an, Dreams of Fairy Mountain multimedia spectacle in Changdao, and Nanxun Old Town in Huzhou.