The Vegas Golden Knights retired jersey No. 58 and honored victims of the Las Vegas shooting at the Route 91 Harvest music festival which killed 58 people and injured 851 others. In a Mach 31 pre-game ceremony at the T-Mobile Arena, the team displayed those 58 names using dramatic on-ice projection mapping.

The Golden Knights have beaten the odds throughout its 2017-2018 campaign, and not just because the over-achieving expansion team will be the Western Conference’s No. 2 seed in the playoffs. There’s also the matter of creating a product that stands out in Las Vegas. The on-ice play has been the biggest factor by far, but the on-ice projection by Image Engineering using Christie Projectors and processing technology has helped, too.

Consider that on the Vegas Golden Knight’s home opener at T-Mobile Arena was on October 10, 2017 – a mere nine days after that gunman opened fire opened fire on the Las Vegas Strip.

“We wanted to honor the Las Vegas shooting victims, the survivors and the first responders…months of planning turned into a few days of planning,” says Jonny Greco.

Until then, from a presentation standpoint, the team had been focused on the challenge of creating pre-game content that would help the NHL’s first Las Vegas franchise make a splash, using 12 Christie WU20K-J projectors, Christie Mystique Install, Christie Pandoras Box and Christie Widget Designer to create the on-ice show.

Then it became more important to make a statement.

“We wanted to honor the victims, the survivors and the first responders…months of planning turned into a few days of planning. We were listening to the community and seeing what made the most sense,” says Jonny Greco, VP, events and entertainment, Vegas Golden Knights, in a Christie press release.

The NHL franchise ended up using staggering ice projection mapping to honor the first responders, victims and survivors by projection mapping by displaying the names of the 58 victims on the ice followed by 58 seconds of silence.

“It was celebrating this city and acknowledging what had happened and giving Las Vegas the opportunity to honor and grieve together, and then transition into a few hours of time when hopefully they could have some fun and be in a more positive place,” says Greco. 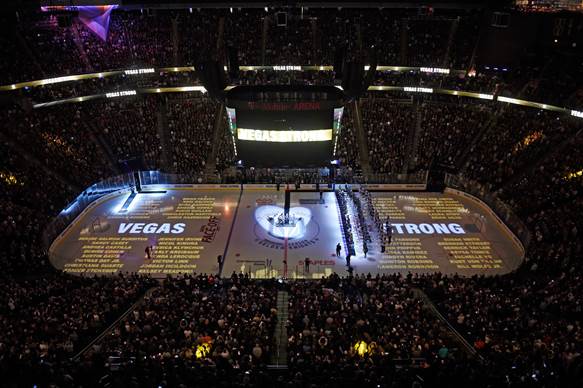 While many NHL franchises can rely on well-established fan base loyalty, at T-Mobile Arena the Vegas Golden Knights have its work cut out for them to win over fans. “Within three hours we have to win them over. It’s quite a concentrated effort,” says Greco.

A big part of the fan experience is created by the Golden Knights and Image Engineering and using Christie technology.  “Christie’s reputation obviously is phenomenal and all over this town,” says Greco. “All over The Strip you see Christie projectors. I didn’t have a lot of experience with that coming in and so that’s where you trust great people to do great things at great times – and Image Engineering was able to do that.” 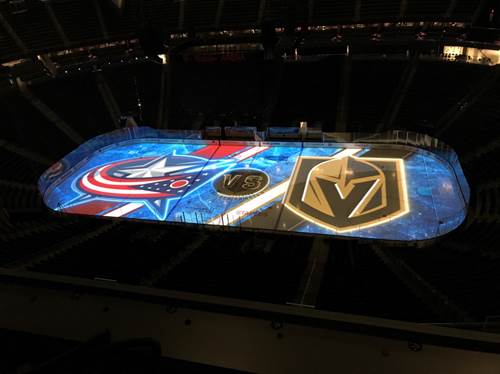 Image Engineering was brought on board by the Golden Knights to handle the full game presentation, including AV integration, according to a Christie press release.

“We took a lot of care to figure out an installation plan that was going to work for T-Mobile Arena because they do have so many large concerts and one-off shows that come in and out so frequently,” says Ian Bottiglieri, director of project management, Image Engineering.

There are 12 Christie projectors are in “pods” of two near each face-off circle, each blue line, and center ice, on each side of the arena, Christie explains.

Image Engineering then used Christie Mystique to align the projectors, saving both them and the Golden Knights what would normally be between 8 to 10 hours every time the Christie projectors needed realignment after being re-positioned for a concert or other event, according to the press release.

“Mystique was great because it took about four to five hours to get Mystique set up and running for the first time.

“After that, we didn’t even really need to think about our alignment because we just needed to block out a 15-minute time period to be able to run the Mystique system and everything would be realigned and perfectly warped and blended. That definitely took a lot of angst and anxiousness out of the equation because the alignment wasn’t even a concern because of the Mystique system,” says Bottiglieri.

The Pandoras Box Quad Player is integrated with the time code triggers from the Daktronics system, triggering the content in a synchronized fashion, and, according to Bottiglieri, the Golden Knights’ technical team are rapidly learning what Pandoras Box is capable of and continue to push the envelope with some “cool, creative stuff.”

With extensive experience working with Christie technology “it was a natural fit,” says Bottiglieri. “It wasn’t a question for us of who we were going to use or what the product was going to be.” 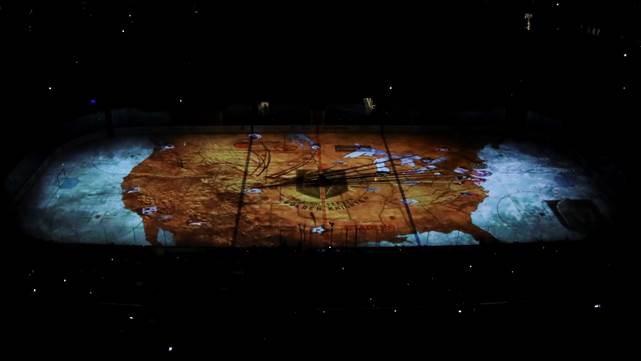