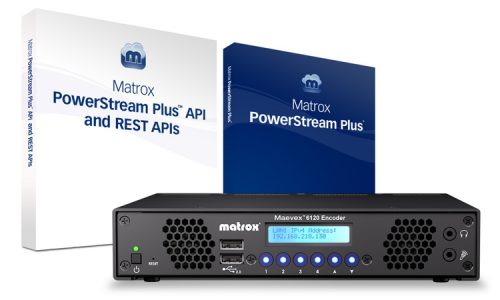 The Matrox Maevex 6120 dual 4K enterprise encoder appliance is now shipping, according to an announcement this week from Matrox Graphics.

“The powerful standalone appliance is ideal for a variety streaming and recording applications in corporate, education, digital signage, military, government, control rooms and more,” according to the Matrox announcement.

Packaged in a rack-ready form factor, Maevex 6120 “features ground-breaking encoding capabilities that can easily feed cloud-based servers to reach internet viewers, push many streams on-premises over the LAN for local audiences and record to local or network storage for later editing and viewing—all concurrently,” according to the Matrox press release.

The PowerStream Plus API for Windows and Linux and lower-level REST API are also available for integrators and developers looking to create personalized Maevex control applications. These APIs can be used to include Maevex functionality into existing or even third-party applications.

“And now with Maevex 6120, this provides customers with even greater flexibility to meet a wider range of requirements, either as a better fit for single- or dual-input streaming and recording applications, or by mixing and matching with Maevex 6150.”