Related: A Lesson in How to Impress Hard-to-Impress College Students with AV

Guests are fully immersed in the 80-seat Action Theater with 3D Live’s 60-foot, 4K LED screen and an 80-channel surround sound system. An actor playing one of the game’s characters captains the audience’s ship, which travels alongside the main starship, Normandy, through a mass relay to the planet Terra Nova.

3D Live’s founder said it hired Electrosonic because of the company’s experience with turn-keying rides and a proven ability to budget for a project of such scope. Chief among Electrosonic’s tasks was installing a full-range audio system with a QSC Q-SYS Core and QSC speakers providing the required surround sound control. The Q-SYS installation plays over 80 channels of audio synchronized with video, while over 70 QSC speakers fill the Action Theater, exit way, and queue.

A 7th Sense Delta Infinity II server supports 3D Live’s content, media processors and proprietary 3D LED screen, and an additional input card enables the server to be adapted to another source, such as a PC for a PowerPoint presentation in the theater space. 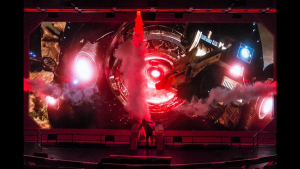 Paying close homage to the intense, futuristic world which the ride embodies, Electrosonic provides an almost-4D sound by installing over 204-channel RDL distribution amplifiers connected to 85 custom mini-array near field railing speakers. A Shure wireless mic for the live actor was also installed.

The company reports that the only true roadblock came in the form of retrofitting a former motion-based theater for all of the vendors involved. The final, front-line hang of speakers, center cluster, and subwoofers required very particular adjustments.

Officials at 3D Live report “Mass Effect: New Earth” received great reviews and was completed for a fraction of the cost of other big-name attractions.