New York City’s most famous landmark lights up with faces of endangered species, becomes beacon of hope for animal conservationists around the world.

New 200-seat patio is outfitted with SunBriteDS weatherproof displays for watching games in the summer and lasting through the winter.>

Lighting designer and director for the latest Rolling Stones’ tour talk design, gear and venue for an artist and tour of this size.> 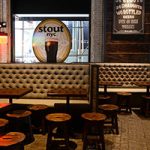