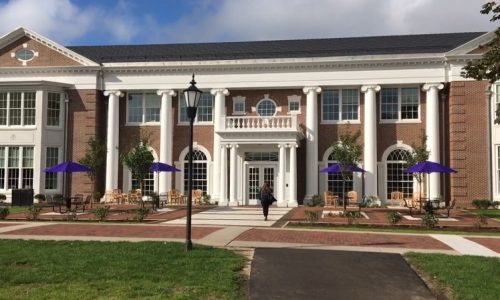 Stonehill College's Thomas and Donna May School of Arts and Sciences

Stonehill College’s campus is green — both literally and sustainably.

Like most colleges, North Easton, Mass.-based Stonehill draws its green culture from the ideas of faculty, staff, students, and technologies that save energy.

“Not only are we doing projects on water conservation and energy management, we’re building solar farms and we’re putting in electric vehicle charging stations,” says Craig Binney, associate vice president for finance and operations at Stonehill. “We’re doing a lot of different facility type projects. We have a very multi-dimensional approach to sustainability.”

“If you asked [the energy manager], what is the number one thing you can do on campus, she would say energy management systems and scheduling buildings,” Binney says. “We’ve had Stanger Hall (our computer lab and business building) — that used to be electric heat, and used to run 24/7. Now, it has controls on it and we’ve seen a great reduction in electric usage. It’s now managed and the building is not heated or cooled when it is vacant.”

“They can use pre-printed paper in the machines,” says Reece, director of marketing for Mcor Technologies. “You print out a bunch of theses and you have all this paper. What do you do with it? You can toss it in the recycle bin, but you can also use it in the printer. We are the only company in the world that uses ordinary copy paper in a 3D printer.”

Learn more about green technologies that integrators can and are implementing in colleges in an extended version of this article on HigherEdTechDecisions.com, plus much more higher ed market analysis.