Dante has gained an overwhelming acceptance in the marketplace with more than 300 manufacturer-licensees having produced more than 1000 products (at the time of this writing).

Dante provides a networked audio transport for wired microphones and control, bringing many benefits such as improved system performance, reduction in cabling and more to installations of all sizes. Specifically, in conference rooms, Dante has enabled a new trend: converting analog microphones and LED/pushbuttons at the table into a high quality single cable transport.

In general, longer analog cable runs increase capacitance and susceptibility to noise and thus decrease audio performance. But, with good quality cable and the short runs typical of most conference rooms (50-ft – 300-ft), these effects are mitigated.

The active electronics in Dante transporters put microphone signals and GPIO with regulated voltage and current sources right at the table, where the microphones are installed.

UTBs provide preamplification, phantom power, analog-to-digital conversion and logic GPIO to a conference microphone. These operations are otherwise driven from connections on the back panel of an audio processor or control system.

Bi-directional control information can also pass through the very same cable that carries the digital audio signals. These control signals can be proprietary, such as with a digital mixer communicating preamplifier setting changes to a headamp, or manipulated with 3rd party control systems.

Regardless, signal information can interface with any Dante-enabled device and merely use network capabilities to consolidate multi-channel control and signal cabling through a single category cable. Many devices also support PoE (Power-over-Ethernet), making Dante a one-cable solution for audio.

Dante devices operate on standard network protocols utilizing readily available network switches. Under certain circumstances, it is also possible to use the customer’s enterprise switches for connectivity to a central equipment room –though a dedicated network reserved for audio has the highest reliability potential.

In comparison to the traditional homerun cabling for conferencing, where there is one dedicated cable for signal and another for control from each microphone, a networked under-table box (UTB) can drastically reduce the number and types of cables pulled to the tables wired for microphones and logic.

One example is a new 8-channel mic/line Dante enabled UTB from Bose Professional which claims to replace 17 cables—eight analog microphone cables, eight control cables for LEDs/pushbuttons and one for power—with just one Category 5 cable. This is particularly beneficial in undersized floor box/core/conduit situations, where the capacity to support cable bundles is limited.

A single category cable is the only requirement for getting your audio and control signals to the table. The cable pulls, and pull schedules, become markedly easier to complete.

Whatever your method is for splicing microphone signal and logic conductors into other cabling, it is surely a time consuming and unpleasant proposition. Alternatively, to these troublesome splices, with a networked UTB, signals and logic connect directly to Dante transporters with easy to terminate contacts for microphone signals and GPIO contacts to be located right where you need them – at the table.

Product cost is nearly always a factor in commercial AV design decisions. UTBs range from $500 to over $1,000 depending on the features and number of GPIO, but provide time and cost saving benefits for design, installation and service. The cost of installing networked boxes under a conference table can be hard to justify in some situations, even relative to the cost of materials and labor in the traditional wiring schemes where all of the signals are home run back to the AV rack. Designers and integrators will want to weigh the cost of the under-table box hardware against potential savings, along with expected improvements in audio quality and reliability.

As a consultant, I often work on projects with high end custom tables. A lot of fuss is put into coordinating and designing these tables – and rightfully so. The extra effort also means that the table delivery is often delayed, with little time to spare to get the system up and running before move-in.

While waiting for these tables to arrive on site, my contractors use this time to “mock-up” the microphones and endpoints on the floor to test signal, logic controls, programming and DSP configuration. Knowing that these major steps are complete is a good use of downtime and is time that can be saved after the table is completely wired.

For me, designing with UTB’s has helped speed up my design time. Less time is spent calculating conduit fill percentages. The floor box can be downsized and the number of AV conduits can be significantly reduced. This is especially helpful when sharing floor boxes and poke-throughs with other trades.

With an under-table box, I can be confident in having the correct number of input and logic channels for each microphone.

Service technicians probably have the hardest jobs in our industry. He or she is often being called upon to troubleshoot and repair problems with no prior knowledge of the system, including DSP configuration, and control system programming. Not to mention, they are probably being pinched for time by an antsy client who wants to immediately resume use of their AV-equipped space and/or who may be annoyed that their system is not working properly.

Profits can be lost and client relationships can be strained by continual problems requiring service and repair to warrantied systems.

Under these conditions, which is easier to fix, a bundle of wires tightly zip-tied together and spliced somehow or a Dante transporter that segregates cabling into clearly labeled connectors installed under the table? It is easier to download a DSP configuration file and use software to troubleshoot and resolve the issue. 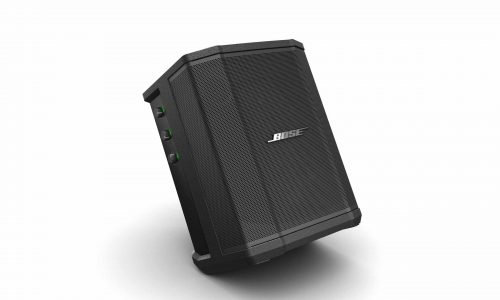 While DSP manufacturers have traditionally focused on generic, networked I/O expanders, it is the microphone and IO-interface manufacturers who have pioneered the purpose-built Dante-enabled microphone interfaces. These microphone UTBs have gained favor due to the acceptance of Dante in the conference room and the need to simplify cabling from the table. The expectation is that these devices accommodate microphone signals and LED/Pushbutton functionality from a single networked device. In many of my firm’s designs, rooms with table microphones are designed using Dante enabled UTBs.

Bose Professional has raised the bar in this category. Their recently introduced ControlSpace EX conferencing line-up includes a 4-channel and 8-channel Dante microphone interface. Bose has included all of the important features into these devices: PoE, multiple GPIO at each input for mic LED/pushbuttons, 48V phantom power, and daisy-chaining in a very sleek, low profile design. They are the first manufacturer to create “microphone-agnostic” Dante under-table boxes and support popular brands like Shure, Clock Audio, Audio-Technica, Earthworks and even the Harry Joseph “Hushbutton” LED ring. Most surprisingly, their list price is lower than existing products; and the 8-channel version sets a new low for cost-per-channel in this category.

Bose combines their ControlSpace protocols and a third-party API into one version of each model. Once joined to the Dante network with the ControlSpace EX conferencing DSP, the under-table boxes pair themselves by subscribing Dante streams to the DSP. All other configuration is done from inside ControlSpace Designer software. Local GPIO on each channel provide up to 12 Volts DC and can support most popular conferencing mics, LED rings and pushbuttons.

Dante has reached its adolescence as a widely acceptable and reliable standard for audio transport, replacing outmoded wiring approaches. We are now seeing ‘next gen’ products emerging within new categories such as the Dante microphone interface UTB.  This evolution will accelerate the trend of simplifying cabling by converting microphones to Dante at the table.  With the new, lower price points of the latest under-table devices, the aforementioned benefits can now be realized at costs that are equal to or less than traditional analog wiring. “One cable to the table” is here today, and this is something for consultants and integrators to take notice of.

Marc Happes is a senior engineer and consultant with ACT Associates, LLC in Boston, MA. He earned both a Bachelor and Master’s Degree in electrical engineering from Binghamton University in New York. His concentration is in digital signal processing. Before relocating to Boston and before becoming a consultant, Marc worked as an engineer for an AV integrator where he was involved in design, implementation and commissioning of many successful projects. He is CTS-D and Dante Level II certified. Marc can be reached at marc@act-associates.com.