During InfoComm ’22, virtual reality, or “VR,” joined a slew of terms — “hybrid workforce,” “unified communications,” “collaboration,” etc. — that buzzed throughout the exhibit halls. The show also witnessed countless visitors trying on and demoing VR headsets available at booths. This virtual reality emphasis at the biggest North American trade show in our industry indicates that a change is in effect for the AV business.

Indeed, in the last few years, VR technology has expanded beyond just gaming. It has been established in higher ed, medical and government applications for some time. For example, it is used in patient treatment and simulation of in battle tactics. However, VR as a design environment can also be a powerful tool for integrators, especially during project planning. We might call this the VR-as-a-Service model. But what, exactly, is it?

To answer that question, Commercial Integrator turns to David Thorson from AVI-SPL and Ken Brueck from Modus VR. They discuss how to apply VR when designing installation projects in various commercial markets.

Bending the Sphere of VR

VR is far more than just dazzling images seen through the lens of fancy — albeit sometimes heavy — headsets. According to Thorson, AVI-SPL’s vice president of programming, VR actually allows people to approach problems in a different manner. “VR is a lot faster and provides a more normal way of getting the job done,” he explains.

Speaking along similar lines, Brueck, cofounder of Modus VR, underlines that the technology holds unique benefits as compared to others. “VR’s strengths lie in its abilities to communicate space and technical details,” he continues, “And anyone whose business revolves around these aspects is highly incentivized to adopt [such] technologies that help them discover, design around and communicate anything.”

Turning to integrators’ needs, Thorson and Brueck both emphasize the pain points associated with installation projects’ design aspects. Thorson notes that effective design often centers on rendering things properly; however, there are several audiovisual standards (e.g., pixel pitch, viewing distances) that can be hard to understand from simply reading a PDF document or examining a 2D rendering. “Unless you’ve seen it with your own eyes, you might not understand the decision or the impact,” Thorson argues.

Also Read: An Integrator’s Place in the Emerging Trend of Virtual Reality Collaboration

For Brueck, personal experience underlines that point. “I was dealing with a large AV project at my residence, and I couldn’t wrap my head around some of the solutions pitched by the integrator,” he recalls, “Once the project was completed, I could finally see what they meant. But we would have arrived at a better solution, and much faster, if we’d had a better platform to communicate ideas.”

This similarity of thinking brought together AVI-SPL and Modus VR with the goal of employing VR technology to imagine, design, revise and “occupy” spaces before they physically exist. When the two firms interacted at InfoComm ’21, it set the stage for a successful partnership.

Thorson reveals how the collaboration fell into place, saying, “John Richards [director of engineering, global] and I were extremely keen to experience the Modus VR demo [at InfoComm], and we saw how its potential can be used in the residential [and] commercial markets.” He continues, “Fast forward a few months, we began working together, and [we’ve] been building since then.”

Brueck agrees, remarking that the first notes of success manifested during a joint presentation at AVI-SPL Sales Acceleration Summit 2022. He explains, “We got to speak with a lot of account managers [there], and it set off this wildfire that has just continued to grow.” Indeed, at InfoComm ’22, hundreds of showgoers thronged to the AVI-SPL booth to witness how VR could enhance integrators’ efforts to design effective workplaces. Donning VR headsets, visitors got to engage with the technology and experience its capabilities, including finding themselves “sitting” in virtual workspaces that don’t yet exist in the physical world. 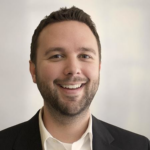 When coming together in a virtual-experience meeting, it facilitates a better collaboration experience.

Thorson and Brueck enthuse about the positive reaction that the demo sessions yielded. Thorson says client engagement has risen considerably. He recalls Dave Lambe, design engineer from AVI-SPL’s northeast region who has been using these services as part of his customer engagements for several months. “It’s now become an expectation — a part of the natural motion,” Thorson notes. “Having that kind of feedback is rewarding.”

One of the biggest takeaways, Brueck adds, is that utilizing VR doesn’t just lower the barrier to communication but also diminishes barriers to creativity. He cites the fact that manufacturers, too, are now taking advantage of the technology. “They’ve extended the applications to webinars, where they can demonstrate different products in an engaging manner,” Brueck explains.

Although in its nascent stages, this collaboration, Thorson and Brueck say, will be mutually beneficial. The two believe that VR-as-a-Service will effectively bring all project stakeholders — integrators, system designers, end users, architects, interior designers — to the table earlier. Moreover, it helps keep everyone engaged at the same level. 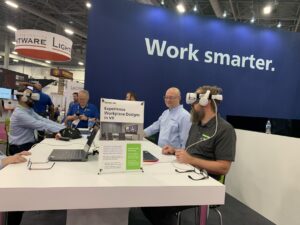 When people can clearly envision the final result — when it is right in front of them — everyone has a natural tendency to speak up, Thorson opines, even if they don’t possess in-depth AV knowledge. He then reveals that the VR-as-a-service model has built-in design logic which allows users to determine whether a room/technology configuration will actually work. “Essentially, because of this built-in design logic and the ability to experience the proposed space virtually, VR allows people to make an educated decision, which is an incredibly powerful thing,” he adds.

When integrators rely on documents filled with technical jargon, such as acoustic dispersion patterns or camera field of view, Thorson explains, some stakeholders/end users feel alienated from the conversation. They don’t have a real entry point. “However, with a proper visualization, it’s a lot easier to discuss [issues] and arrive at prompt decisions,” Thorson states.

He cites an example of a workspace design that had two large displays placed side by side with one camera below. “For executives in the room, they had to move their head side-to-side,” he recounts, “But for remote participants, it seemed as if they were performing the universal indicator for ‘no’ which didn’t look too good!”

Although the camera placement was rectified later, Thorson expands on how using VR would’ve helped approach the problem. “In VR, it’s easy to see how different camera angles affect the participants’ view. If the two don’t align, it appears as a red flag. Users can then shift and change the camera placements. They can also customize cameras, audio and other equipment as per their needs. This allows them the space for experimentation,” he states, “Mainly, the problem is solved even before the room has come to life!”

Brueck notes that VR also presents a more economical solution. Oftentimes, he comments, integrators and other project stakeholders go back and forth on designs; this becomes not only time consuming but also expensive. To augment his point, Brueck highlights one of the disadvantages of traditional 3D rendering tools. “They’re great tools, but often costly and cumbersome,” he acknowledges. “If the renders come in toward the end of the project, it becomes a crucial standpoint with the looming deadline.” Brueck states that, by the time that point is reached, it’s almost too late to revisit decisions made during the design process. 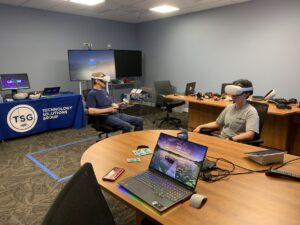 Anyone who perceives it from a problem-solving mindset will most certainly find incredible uses of VR.

“We have a saying: ‘Fail early,’” Brueck declares. You want to discover failures early on when the repercussions are minimal. According to Brueck, VR helps integrators and consultants embrace this philosophy, as it brings stakeholders together earlier and therefore keeps the costs of implementing changes low. He recalls an integrator who was looking to refresh an old conference room that had a projection screen nearly covering an entire wall.

“Also, they were on a tight budget and there was already an installed camera. There was no optimal place for the new camera. Any location picked would be a significant compromise, and the stakeholders couldn’t agree on the least-worst option,” Brueck emphasizes. However, by building the room in VR, the team could quickly discover what the video call experience would be like and were able to agree on the best solution. As a result, the team could remain on target with both the budget and the installation timeline.

Every aspect of the integration industry has been affected by the pandemic and its related effects. However, VR can help mitigate some of these issues — namely, supply-chain snarls, uncertain project timelines or even a dearth of in-person meetings. Brueck explains that decision-making now must be quicker than ever before. “We need to make these decisions now,” he expounds. “However, [many decisions] are based on vague and changing data, which means the urgency and stakes have never been greater.”

Brueck then adds, “When you bring people together in a virtual-experience meeting, it facilitates a better collaboration experience. People can exchange feedback and decisions in a timely fashion.” Summing things up, Thorson notes, “In essence, we’re looking to enhance productivity and streamline the whole process for everyone across the board.”

Embracing VR as a Tool

Quite simply, VR is an incredibly powerful design tool for those tackling the new hybrid work model. And, summing up what we’ve learned, VR-as-a-Service for integrators enables greater efficiency, greater profit potential and fewer callbacks. That means VR is a huge asset from a business standpoint. What’s more, it breaks barriers to productivity and enhances creativity.

Alluding to the pandemic, Thorson states, “VR is resonating with customers now, as the [drive for] meeting equity has changed. Workplace design itself has changed. Obviously, there are a host of other tools, but VR helps visualize those end results.” And, most importantly, it does so early in the process and in a way that empowers all stakeholders to have their voices heard. 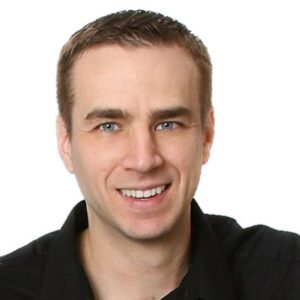 The problem is solved even before the room has come to life!

According to Brueck, VR, at its core, helps to solve problems, and that’s why it’s gaining traction. “We’re not meeting in VR for the sake of VR,” he explains. “We’re meeting in VR to envision something that occupies space — basically, we’re solving a spatial problem.”

Thinking about the future, Thorson and Brueck both emphasize that this is just the beginning. Thorson also expresses his optimism on the adoption of VR technologies in other spaces. “We’re leading the way with VR now and I see it going a long way yet,” he declares. “Especially with applications in immersive environments. Yesterday, it was a movie studio; today, it is an XR studio. Maybe it’s an executive meeting today; tomorrow, it is a virtual enhanced briefing system.” He also believes that the world of VR is still unpredictable, which means interesting applications could materialize in the future.

Brueck echoes those thoughts, adding, “VR is tightly intertwined with the hardware. While hardware is easy to predict, the software application remains unprecedented.” He speculates that VR-as-a-Service is still in its infancy. Nevertheless, he asserts, “I think applications in the future will, in fact, surprise us. Anyone who perceives it from a problem-solving mindset will most certainly find incredible uses of VR.”