Any screen in any meeting space can now display digital signage content when it’s not being used for collaboration, following the release of Mersive Solstice 3.4. 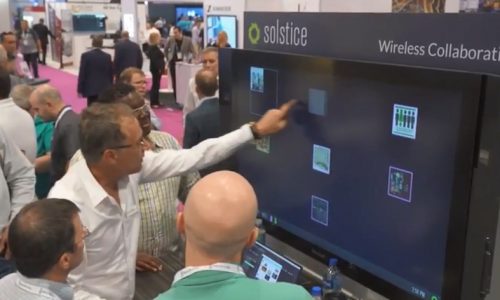 “Mersive Solstice is evolving in to a complete meeting platform, including scheduling before the meeting, collaboration during the meeting and signage display at all other times.

“Mersive is making signage an affordable option in every meeting space in a building, including the smallest huddle rooms. Screens appear on almost every wall in commercial, education and other environments. We’re bringing completely new flexibility to how they can be used,” he said.

Jaynes said Mersive “anticipate[s] that screens in transition spaces and other digital signage endpoints will be adapted to allow collaboration between colleagues ‘on the fly.’ Meetings can even start in the corridor while participants wait for the meeting space itself to become free.”

Mersive Solstice 3.4 provides “seamless transition between digital signage and wireless collaboration,” according to the Mersive press release. The new version supports the playback of HTML signage content from a designated URL between meetings.

As an add-on delivered via a software update, Solstice digital signage is “cost-effective for deployment from the smallest huddle space to the largest auditoriums.”

Building upon the success of its core wireless collaboration solution, Mersive is expanding its customer offerings “to improve the meeting experience and add value to meeting spaces and technology like the digital signage capability,” according to the company press release.

Mersive launched Solstice Kepler at ISE 2018 and began shipping the product this summer. The monitoring and meeting analytics solution works kind of like a ridesharing app, insofar as users “rate” their meetings, creating “pattern recognition” of which meetings work and why.