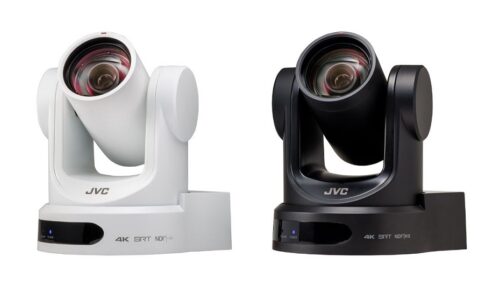 A third option, the new HD KY-PZ200W/B, provides an economical solution, sans NDI|HX. All camera models are available in black or white variations to best match the ambience of the venue/project.

“This new camera line marks many firsts for us at JVC, including our first PTZ camera to feature 4K streaming as well as our first PTZ with NDI|HX and SRT,” says Joe D’Amico, Vice President, JVC Professional Video. “With integrated NDI|HX technology from Vizrt Group, the JVC PTZ cameras now offer a high-quality, low-latency IP video transmission standard that is ideal for streaming in an ever-evolving media landscape.”

“NDI-enabled devices like JVC’s new PTZ NDI camera exponentially increase the video sources available for storytellers creating efficiencies and opportunities that did not previously exist,” says Michael Namatinia, President and General Manager of NDI. “At NDI, we have so much respect for JVC as a brand and for their quality products.”

In addition to the NDI|HX functionalities of the 4K KY-PZ400N and HD KY-PZ200N, all three cameras include SRT, HTTP, RTSP, RTMP/RTMPS and standard protocols. With SRT open-source technology now becoming synonymous to JVC cameras, PTZ users are afforded a truly future-proofed solution with continual firmware updates.

Additionally, with the incorporated Vertical Interval Time Code (VITC) with Network Time Protocol (NTP), the new JVC PTZ cameras also feature multi-camera synchronization for live event production. This feature is ideal for the mixing and streaming of concerts, shows, sports and other live productions where image synchronization is crucial. Remote control capabilities are made possible through JVC’s RM-LP100 Remote Camera Controller, JVC’s KM-IP6000/4000 Live IP Production Suites or a variety of other options from vMix, OBS Studio and NewTek.

For remote conferences and lectures, the KY-PZ200N and KY-PZ200 support UVC (USB Video Class), which enables the cameras to be used as webcams. Both models can be directly connected to a PC using a USB cable (sold separately), making them ideal for a range of educational and other digital applications.