Pope Francis this week talked to Russian cosmonauts at the International Space Station.

Even the Pope sometimes has trouble staying connected when he uses video conferencing.

Pope Francis chatted for about 20 minutes with Russian cosmonauts at the International Space Station this week, praising the crew for their understanding of love and overcoming a brief interruption of the call triggered by a line dropping at the orbiting laboratory.

During the conversation, according to the Associated Press, Pope Francis peppered Italian astronaut/translator Paolo Nespoli and five other crew members with questions both simple — What inspired them to be astronauts? — and philosophical — How do they view mankind’s place in the universe?

The responses he received, in particular from Russian cosmonauts Alexander Misurkin and Sergey Ryazanskiy, “marked another small step for the Vatican’s long tense relations with Orthodox Russia,” according to the AP account of the conversation.

Pope Francis, who has made improving those ties a priority of his tenure, became the first pope in a millennium to meet with the Russian Orthodox patriarch last year.

While I highly doubt Pope Francis himself set up the video conferencing or even pushed a button to kick it off, this is the kind of opportunity that’s only possible with proper planning and amazing technology. It should inspire integrators to think big, and then think even bigger.

This week’s call with the Russian cosmonauts was actually the second time a pope called someone in space.

Pope Benedict XVI called the space station in 2011 and asked about the future of the planet and the environmental risks it faced.

Pope Paul VI sent a radio message to astronauts Neil Armstrong, Edwin Aldrin and Michael Collins after their historic 1969 moonwalk, calling them “conquerors of the Moon,” according to the AP. 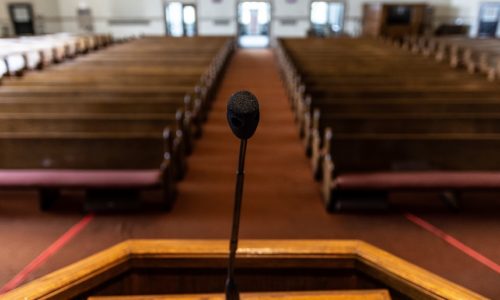 Related: The House of Worship Technology Market in 2021

We don’t often think about the Catholic Church when it comes to futuristic opportunities and events, but clearly church leaders are trying to help Pope Francis embrace technology—and he’s doing it quite well, from virtual masses to his myriad Twitter accounts to video conferencing.

How long will it be before we see Pope Francis wearing virtual reality goggles or find him fumbling with a touchscreen kiosk in his favorite quick-service restaurant?

The lesson here is: don’t be afraid to talk to your clients about what’s possible with the right technology solution. They might not strike you as someone who’ll use the technology right away or embrace it to its fullest, but if you teach them well, they’ll get the enjoyment out of it you envision and trust you as an integrator the next time you suggest something.

That leads to the idea of managed services and building and maintaining a relationship with your customers.

Do you have a surprising success story with one of your clients when it comes to technology? Let me know about it.