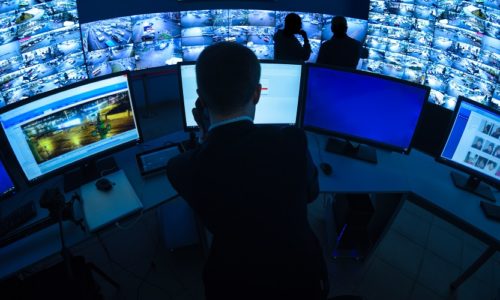 For custom integrator Todd Magee of T. Magee Inc., getting a phone call directly from the U.S. Immigration and Customs Enforcement (ICE) office was surprising. The call however, led to an interesting opportunity—installation of the RTI’s presentation switcher and control processor to ICE’s Atlanta office.

Identifying the Issue at ICE

The office’s meeting spaces included a large training room and two conference rooms. The rooms were equipped with an old combination of control and video systems. These systems were capable of only distributing and controlling component video signals. They no longer integrated with the modern digital sources and devices in the rooms. Thus, the office was in dire need of an upgrade.

Robert Hammer, the special agent in charge, was tasked with finding a solution that supported the rooms’ upgraded displays as well as the audio and video. The solution also extended to UC sources that would allow users to easily control various AV systems with one-button commands. Some of the commands included distributing laptop feed to screens and connecting to the videoconferencing systems.

Special Agent Hammer utilized his computer information systems background to conduct research. He looked for a system to not only handle the latest sources, but also provide a streamlined workflow. This would then allow all users to walk into the room and begin a meeting at the touch of a button. His search led him to RTI’s new VXP-82 AV presentation switcher with built-in control processor — and to Magee.

At the time of the project, the VXP-82 had not yet been released to the market by RTI. So, Special Agent Hammer and the Atlanta ICE facility represented its very first deployment. However, the all-in-one presentation system combining an 8×2 multi-format video switcher with an RTI control processor for various meeting spaces was exactly what the facility needed.

The VXP-82 handles video signals from up to eight sources and enables presentations on two monitors, or in two rooms simultaneously. This made it ideal for the agency’s room requirements.

“The goal was to recreate what the old system was doing, only better, and of course to incorporate the new sources and monitors,” added Magee.

For the large training and conference room, the sources included a Polycom videoconferencing system and Blu-ray player. It also had a cable TV channel which needed to be fed to a 75-inch Samsung LED display and 86-inch Dell presentation monitor.

With the new presentation system, presenters can simply plug in a laptop or other source. This then launches preset adjustments to the room’s lighting, HVAC, external audio amplification, videoconferencing, and more. The simple interface makes it intuitive for users to route sources and outputs without relying on the IT department.

From an RTI KA8 touch panel installed at the room’s podium, users can also quickly select the macro they need to adapt the room to their needs. For ICE’s facility, users can choose the programmed macros they need, including Presentation, which immediately distributes the laptop signal to the room’s screens. They can also choose from Watch TV; Watch Blu-ray; Security Feed, and Room Off.

The agency then focused on the other two conference rooms. In the smaller two conference rooms, sources included a BSS BLU-103 conferencing processor and a Blu-ray player. Here, Magee installed an RTI XP-3 control processor to command the BSS BLU-103 conferencing processor, Blu-ray player, and a 4×4 AV Pro Edge HDMI matrix. The processor also distributes those signals to the 75-inch display screen.
Ideal for ICE’s two smaller meeting rooms, the XP-3 provides users with real-time feedback about devices integrated within the room.

Like the training room, users simply tap the command they need from the KA8 touch panel installed in the room.

With RTI’s processor as the nucleus of the facility’s training and meeting rooms, staff can now easily and get down to business. The system works behind the scenes to support training presentations and critical meetings while enabling intuitive and customized control for users.

The agency also has the freedom to add different equipment and more macros, ensuring expansion and adaptability that keeps pace with new and evolving demands.

“RTI allowed us to design a control system that is tailored to support seamless meetings at [ICE] start to finish. No matter who uses the room, they can walk in and get started right away, thanks to the simple control experience all tied to a state-of-the-art RTI control system,” Magee concluded.