We recently took a deep dive into the digital signage market to explore the trend in more detail, with more voices (yours, of course) adding to the conversation about what they were seeing, what they expected to see and what they hoped to see from digital signage brands and video wall companies. 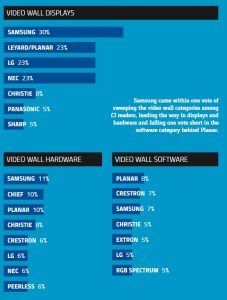 As a result of some survey responses on the best digital signage manufacturers, we were able to glean enough information to determine which brands reign supreme among our readers in six categories.

We’re guessing you’ll agree with some, disagree with some and likely learn something about the pro AV space, your competitors and your own business based on these survey results and we hope you’ll use them as a guide for your next digital signage market endeavor.

In most of the categories, we came away with some clear winners, but there were a few areas where a handful of digital signage manufacturers seem to be delivering just about the same level of satisfaction among those who answered our survey.

That parity seems to present an opportunity for one or more of these video wall companies to do more for their customers and figure out ways to add new ones in the next 12 months.

One caveat to these results for those of you who didn’t take the survey or don’t remember the way it was structured: In the Deep Dive, we asked you for your top three brands one at a time in each of the categories.

For the purposes of this exercise, we eliminated the rankings and tallied all results equally. In other words, whether someone named Apple their first-, second-or third-favorite brand, each mention of Apple counts as one vote in our results.

The digital signage displays category generated some strong feelings for a handful of brands at the top of the rankings, with several others sprinkled in with a vote or two to round things out. 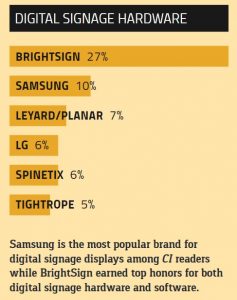 All told, we got 152 responses for the top three digital signage display brands and Samsung led the way with 40 votes.

LG was the second-most popular choice for digital signage displays among our readers with 31 votes, followed by NEC [22 votes], Sharp [12 votes] and Leyard and Planar, which combined for 12 mentions for the gold, silver or bronze medals.

Perhaps surprising among the results, given how ubiquitous projects involving Daktronics are in large venues in particular, was that the large-format display company only garnered one vote in each of the three digital signage categories.

Among the 133 responses for digital signage hardware, BrightSign emerged as the clear winner with 27 total mentions for first, second or third place. 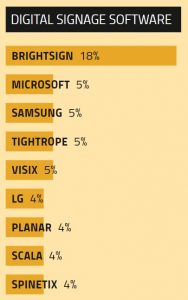 Samsung was the only other brand to crack double-digits for digital signage hardware with 10, followed by Leyard and Planar, which combined for seven votes, LG and Spinetix [six mentions each] and Tightrope [five].

BrightSign was again dominant among our survey respondents when it came to digital signage software, securing 18 votes to lead the way among the 120 total responses, making the company the clear choice among CI readers for the majority of its digital signage needs.

That’s probably not a surprise given how well the company does every year in the CI BEST Awards and TNT Awards programs, but it’s nice validation for Jeff Hastings and his team, to be sure.

Microsoft, Samsung, Tightrope and Visix all finished a distant second to BrightSign among the digital signage brands with five votes each, followed by LG, Planar, Scala and Spinetix with four each.

While BrightSign led the way in two of the three digital signage categories, Samsung did the same on the video wall side—and, as a bonus, came up only one vote short of a clean sweep of all three video wall categories among CI Deep Dive survey respondents.

Among 147 total replies for video wall displays, Samsung led the way with 30 votes, topping the combined power of Leyard and Planar, which earned a total of 23 votes. That total tied LG and NEC, each of which also tallied 23 first-, second-or third-place nods among our readers for their favorite digital signage brands to use for displays.

Christie was next with eight votes, followed byfive votes each for Panasonic and Sharp.

Samsung had to eke out a victory in the most competitive of all six categories but still emerged as the most preferred video wall companies among the 138 replies we got in the survey. Samsung picked up 11 votes, followed by Chief and Planar with 10 votes each, Christie with eight votes and Crestron, LG, NEC and Peerless-AV, with six votes each.

Samsung wasn’t able to pull off the hat trick in the video wall software category, but only finished one vote shy of earning the Triple Crown among CI readers.

Planar earned eight votes among 115 responses, followed by Crestron and Samsung with seven votes each.

The fact that no digital signage brands earned even 10 votes in this category perhaps should tell video wall companies how many choices there are out there for video wall software and that there’s a real chance to dominate in a space that’s so spread out and seemingly even.

Read Next: The MOST Important Digital Signage Trends Following DSE 2018? There’s Only One

What do you think of the results? Do they follow the way you would’ve voted [or did vote]? What do you think it says that a couple of digital signage manufacturers were clearly dominant in several of the categories but at least one of them had no clear winner? Will these results change anything about how you do business?