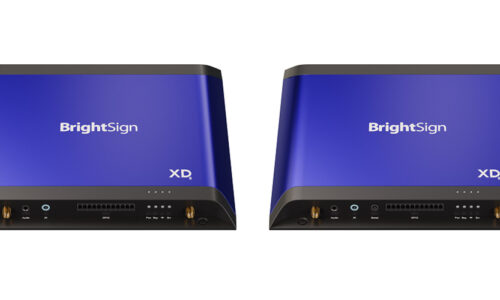 BrightSign, the Los Gatos, Calif.-based provider of digital signage media players, unveiled its new XD5 media players. The new product joins the previously announced XC5 players to round out the first wave of Series 5 media players. Per a statement, the company expects to ship in Q4 of 2022.

The new BrightSign XD5 lineup comprises two models, the XD235 and XD1035. The company adds that it carefully engineered both to deliver inspiring 4K experiences for any enterprise-level digital signage application. The players’ upgraded 4K HTML engine’s optimization allows for responsive interactivity and display of real-time dashboards. It achieved this through significant upgrades to HTML rendering, motion graphics and JavaScript performance.

Hardware-accelerated 4K content rotation and a dynamic mosaic mode also add flexibility to the authoring and playback experience. In sum, the new lineup features Power over Ethernet (PoE+), an upgraded industrial design and a stable supply chain of components. This makes the XD5 lineup a highly reliable solution to meet or exceed any enterprise digital signage needs, says BrightSign.

BrightSign’s new XD5 models join the XC2055 and XC4055 media players, announced prior to InfoComm 2022 in Las Vegas. These previously announced models offer the company’s most powerful HTML5/graphics engine to-date, with graphics performance improvement of up to 10X compared to their predecessors. Both XC5 models support 8K output. One model offers dual HDMI-out (up to two 4K or one 8K) and the other offers quad HDMI-out (up to four 4K or one 8K).

The company continually offers updates for all products within its digital signage ecosystem for reliability, latest services and new leading-edge features. This ensures customers are never stuck with a product that isn’t keeping pace with current market demands.

BrightSign says it expects to ship all four of its new Series 5 media players in November 2022.