Zytronic announces ZXY500 touch controllers, which allow sensors to be designed with reduced non-active borders. According to the company, this allows a 55” diagonal touch sensor can now be designed with sub 10mm borders.

The manufacturer of projected capacitive technology touch sensors says the controllers are in response to a growing demand for narrow screen boarders in interactive video walls.

It’s about more than looks, too: according to Zytronic, the ZXY500 touch controllers also pair well with the increasingly-common use of RFID, NFC and Qi phone charging technologies.

“[Those technologies] all generate wireless signals that can interfere with the operation of conventional touch screens, but the new controller has industry leading signal-to-noise ratios and sophisticated algorithms that change dynamically to reject electromagnetic interference in the operating environment.” 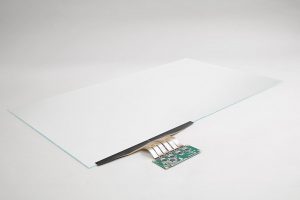 The company says the ZXY500 allows for a decreased air gap between a display and its sensor, reducing optical parallax in the display. The touch controllers can detect touches through over 8mm of cover glass, even with gloved hands.

Related: The Future of Touch Screen Technology: It’s Getting Smarter

The controller and touch sensor together can be powered from a 5V USB port, eliminating the need for a separate power supply.

The ZXY500 is offered with USB output as standard, but also has options to add RS232, I2C, SPI and interfaces, to simplify system integration for industrial and medical applications. The smallest controller in the new ZXY500 controller family has been significantly reduced in size to just 61 x 64mm for the 64-channel version.

The flexible printed circuits (FPC) connecting the touch sensors to the new controllers have also been reduced to just 120mm in length, further helping to achieve a compact overall touch system design.

Zytronic says they’ve custom-designed an ASIC (Application Specific Integrated Circuit) custom chip for the ZXY500 family which allows a reduction in the cost and size of the controller and, according to the company, the “elimination of much of the obsolescence risk associated with the use of third-party components for core parts of the design.”

More on the ASIC chip from Zytronic:

The new ASIC’s are also available together with a STM 32-bit ARM Cortex microprocessor loaded with Zytronic’s proprietary touch detection algorithms as a ‘chip set’. Customers who sign a special licence agreement may then be supplied with the core chip set together with the controller schematics and bill-of-materials.

Zytronic’s engineers will then work with the client to design the ZXY500 controller directly onto a mother board within their device or system, further reducing cost and conserving valuable space.