Jersey City Urby Building, which markets itself as a high-tech, eco-friendly luxury multi-dwelling unit tower, was built with young, telecommuting millennials in mind. Imagine the level of concern when it became clear that residents were falling victim to what has to be the biggest telecommuting challenge: poor cell coverage.

WilsonPro, a cell signal booster maker that ultimately got involved in a solution to the telecommuting challenge, offers up a case study on the unit multi-dwelling unit project. 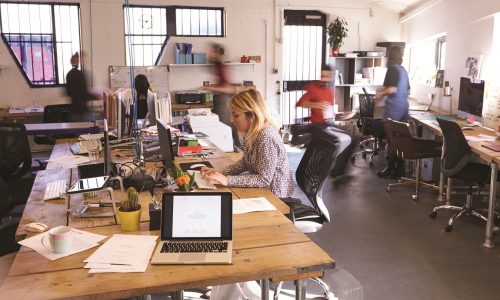 Related: Why the ‘Resimercial Workspace’ is the Next Big Thing in Alternative Workspaces
Jersey City Urby Building is extremely energy efficient, according to the case study. Its green building materials and construction methods earned it its LEED-certification.

Unfortunately, due to the tendency for eco-friendly materials to block cellular signal, the greenest buildings often have the worst reception.

Unsurprisingly, shortly after opening, management received a slew of complaints from residents that they weren’t able to get cell service in both private spaces and common areas.

Since many of these residents work from home, reliable cellular signal is an absolute necessity at the JCUB.

By the time tenants began threatening to break their leases if the issue wasn’t resolved, management was already in talks with cell signal booster integration firm Illuminati Labs to find a long-term solution.

Illuminati Labs, a full-service cell signal booster integration firm, was enlisted to help solve the telecommuting challenge. Urby initially approached Illuminati to install signal boosters in the top 16 of the 72 floors of the building.

WilsonPro boosters, which are carrier-agnostic, were the ideal choice in a residential building where tenants subscribe to a variety of service providers.

Because WilsonPro boosters use a passive distributed antenna system (passive DAS), which amplifies existing cellular signal, the process was minimally invasive, allowing residents to go about their lives without the intrusion of a messy installation.

Within a week of the installation, cell reception results were so good that executives asked Illuminati to fulfill the initially discussed work of installing boosters throughout the entire building, according to WilsonPro.

A month later, Illuminati had installed 18 WilsonPro 4000 boosters and over 300 interior antennas throughout the JCUB to rave results and resident complaints about the quality of service ceased completely. Illuminati was even able to improve cell signal in the isolated basement trash area.

Now, Illuminati Labs has been asked to handle signal booster installation in two additional buildings, which will be erected in early 2019. This will allow the JCUB to continue to guarantee excellent cell reception to their telecommuting prospective residents.

The second installation is expected to take place in early 2019.