Remember Connect4, the classic game from the 1970s where you dropped red or black discs into a plastic grid, trying to be the first to connect four in a row horizontally, vertically or diagonally? Wouldn’t it be fun to try playing it with basketballs? If so, you’ll want to seek out Connect4 Hoops. 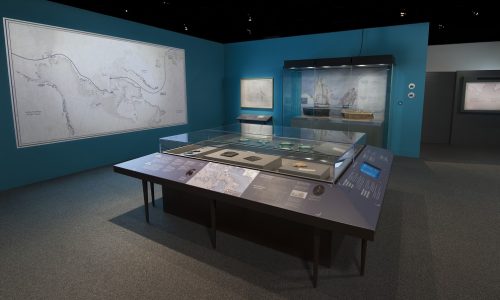 “From the first week we put out a prototype, it was obvious we had a hit,” says Mark Johnson, Electrical Engineer for Bay Tek Games of Pulaski, Wisconsin. “We had lines of people waiting to play.”

Bay Tek fast-tracked development, taking Connect4 Hoops from idea to production in less than nine months. It is now being deployed in 117 Dave & Buster’s locations and will soon roll out to other arcades.

As with other Bay Tek games, the appeal comes from a unique combination of electronic and physical elements, using the electronics to enhance reality.

Players throw real basketballs at real hoops, but when the balls drop into the Connect4 matrix, they’re replaced in real time by a life-sized animation.

For more than 40 years, Bay Tek has manufactured ticket redemption games for arcades including Chuck E. Cheese’s, Dave & Buster’s, GameWorks, and Boomers. They are best known for their novelty games like Big Bass Wheel and the original alley roller, Skee-Ball.

Connect4 Hoops is a direct offspring of three Bay Tek classics: the big screen video version of Connect4 and the basketball shooting games Hot Shot and Super Shot, which were originally sold under the Skee-Ball brand.

“We are always trying to provide an experience you can’t get in your homes with console gaming,” says Marketing Manager Sammy Harrison.

“We know our games have to be so cool, so much fun that people will go out of their way to play them.”

“We use a lot of flat panel displays, but you need something much more durable when throwing balls at a video target,” Hallet explains.

For Connect4 Hoops, using an animated grid, rather than stacking up real basketballs, would greatly simplify the operation of Connect4 Hoops. It would also allow the software team to enhance the play with eye-catching graphics as the balls drop from the hoops. 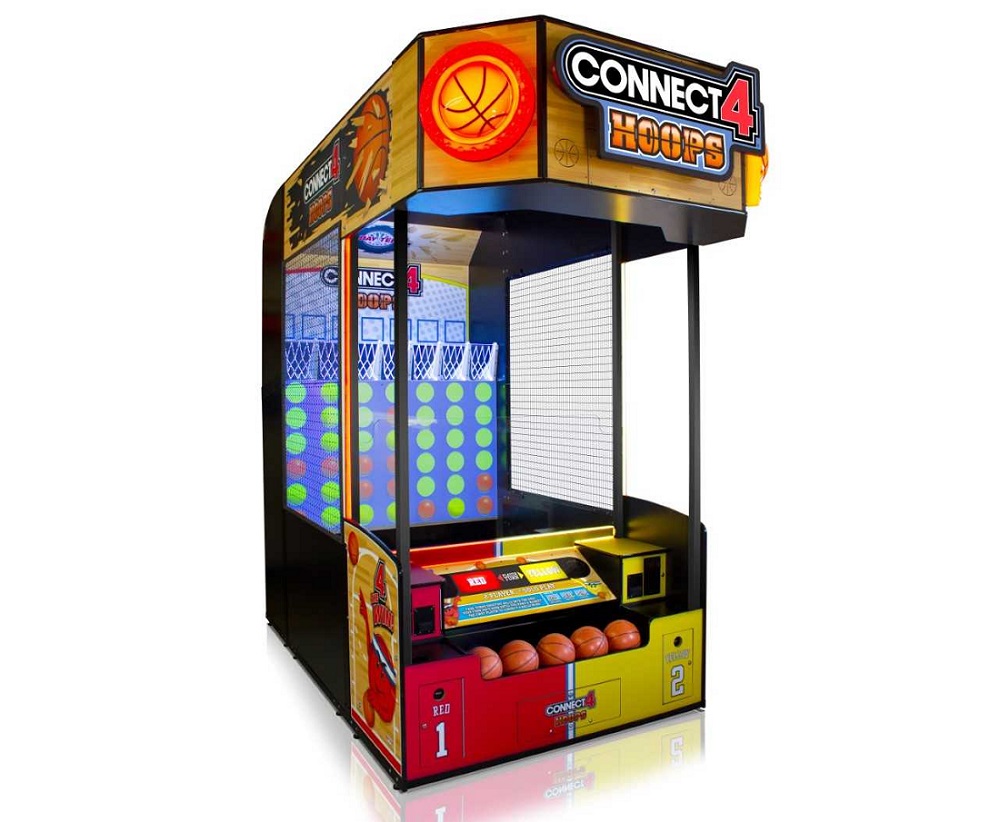 As with the shooting game, impact damage from poorly-aimed basketballs made flat panel displays problematic. The life-size grid required a larger screen than would be affordable for a game of this type.

By using a Casio LampFree projector, the development team was able to build a 70” wide, 60” tall screen of white melamine, or coated plywood, and then place the projector in a marquee above the players’ heads, where it would be protected from damage.

“Back in November, I got a call from Mark, who invited me out to their warehouse in Pulaski,” recalls Gary Huebner of Casio integrator Camera Corner/Connecting Point of Green Bay.

“They had built this huge plywood contraption, and they were playing Connect4 with basketballs and the original projector I had sold them.”

The problem was this original prototype was too big to fit into an arcade, so the team needed advice on what might work with the footprint they had in mind. Huebner recommended the Casio CORE XJ-V110W, a model with a relatively wide angle lens.

“Still, I had a chance to play on this first prototype,” he says, “and it was a ton of fun.”

“We knew we wanted Casio LampFree because the games, in many locations, would be used 24/7,” Johnson explains. “Our clients would not be pleased with frequent lamp changes or other maintenance.”

Huebner recommended Casio LampFree because he had seen remarkably few service issues in the eight years he had sold their projectors.

“Casio likes to say they have less than one percent come back for service during the five-year warranty period, but in our experience, it’s been a lot lower than that,” he says.

“Another consideration was brightness,” Johnson adds.

That was especially tough because the design team felt they could not spend more than $1,000 on the display if Connect4 Hoops was going to be profitable. At 3,500 lumens, the Casio XJ-V110W met the brightness criterion at a price well within the design team’s budget.

“It really was amazing to watch these people work,” Huebner recalls. “It was only eight weeks from the time I delivered their first Casio XJ-V110W to the placement of a finished pre-production model in a local arcade.”

In that short time, the Bay Tek team designed the steel, plywood and etched acyclic structure, built their own onboard computer (using off-the-shelf components), finalized programming, and created all of the graphics.

Once they had the test model, the Bay Tek team placed it in an independent arcade near Pulaski that they work with frequently. “We like to have our early prototypes close by, so we can drop in on Saturdays and watch families play,” Johnson says.

From there, the team placed more prototypes in the Green Bay area, the Wisconsin Dells, then all over the state, testing the Connect4 Hoops for about six months. “Usually we fight to be in the top 25% of the games played in an arcade,” Hallet adds.

“But in this case, our prototypes were in the top two or three, in every location. Dave & Buster’s saw it, and they wanted to do the first national rollout.”

Part of the game’s success comes from the ball the team chose.

“We made a conscious effort to appeal to basketball as well as Connect4 players,” Hallet recalls.

“We didn’t want full men’s regulation, but a size not far from that. We settled on women’s college dimensions, which are just under 10” in diameter.”

“We think we hit the sweet spot,” Johnson adds. “It’s a nice size for adults, but second graders can play against their dads and still hit the baskets.”

The team hit a sweet spot with Casio LampFree, as well.

“Dave & Buster’s is really excited, and they’re doing a national marketing campaign introducing the game,” Johnson says. That will begin in November, by which time there will be at least one Connect4 Hoops game in every one of their locations.

“We’re thrilled with the Casio LampFree projector, Hallet adds. “We’ve had no problems at all, and that’s a first for a projector in a redemption game.”

“The success story for me,” Johnson says, “is that the very first prototype, delivered early in 2018, is still out there after literally tens of thousands of plays, still running with zero issues with that Casio LampFree projector.”

Will Bay Tek use Casio in future games? “There’s a strong likelihood that we will,” Hallet says. “Flat panels require protection. You have to cover them with something strong or they will be damaged.”

“But with the Casio, you’ve got image size and brightness, you’ve got durability, and you can move the main components away from the target,” Johnson adds. “You could even project on a brick wall and throw steel balls at it. The possibilities are endless.”